Team Building in the Sandbox

Our greatest capability in Arabia to best provide peace to its 51 million people from multiple tribes, nations, and cultures is our men and women of our Armed Forces deployed in the region. As the United States downsizes its capacity in the region as a result of winning and deescalating the conflicts in Operation Inherent Resolve and to better its overall readiness and resources in other regions of the world, an increased reliance on partnership, trust, and burden sharing from the Gulf Coalition Council (GCC) Allies is the critical key to success. Forward deployed U.S. forces are the catalyst with their knowledge, experience of capabilities, and operation of systems that the GCC allies need to master, lead, and integrate with each other and leverage existing U.S. sensor capabilities in the region. The United States forward presence in the GCC is made up of shared permanent air, land, and sea bases that project power throughout the region with its respective GCC partners. Bahrain is home to the 5th Fleet of the U.S. Navy, the United Arab Emirates (UAE) and Qatar have the two biggest U.S. Air Force bases in the region (Al Dhafra and Al Udeid), Kuwait is home to the U.S. Army Hub, “Cargo City”. Each of these four GCC/U.S. co-shared bases have operational and deployed U.S. Army Air Defense Artillery Patriot missile defense batteries fused with external sensors to defend these bases from air and ballistic missile threats. In Al Udeid Air Force Base in Qatar, the United States holds the Multi-National Combined Air Operations Center (CAOC) for the entire region and the Senior Air Defense Officer (SADO) that advises the Commander of the COAC for this region. In the missile threat environment from Iran and its backed Houthi proxy in Yemen, missile defense of these power projection bases is absolutely vital to the stability of the region.

We recognize the extreme value and sacrifice by Soldiers of the United States Army deployed to all of the Patriot sites in this region, the U.S. Airmen deployed that provide sensors and operate the complex air picture for this mission, as well as the U.S. Sailors aboard Aegis Ballistic Missile Defense (BMD) ships assigned to the 5th Fleet to defend the Gulf.

In the development of leadership and trust amongst our GCC Allies, we hosted alongside the leadership of the UAE in Abu Dhabi our fourth GCC Air and Missile Defender of the Year last Thursday, September 27. Together we recognized the GCC member participating countries, France, and the United States for their commitment and excellence in the missile defense of the Arabian Peninsula over the past year. The event was hosted at the UAE’s Integrated Air and Missile Defense Center in Abu Dhabi, UAE with and among the graduating class of the multinational 2018 Falcon Shield air and missile defense exercise.

With ensuring that all of the GCC countries get recognized we flew into Qatar, through Oman, to present the 2018 GCC Air and Missile Defender of the Year award and recognize Qatar and the U.S. forces deployed in Qatar. Qatar is MDAA’s 501st Defender of the Year awardee, which has had recipients from 17 different nations and has been hosted in seven different countries since its inception in 2010. 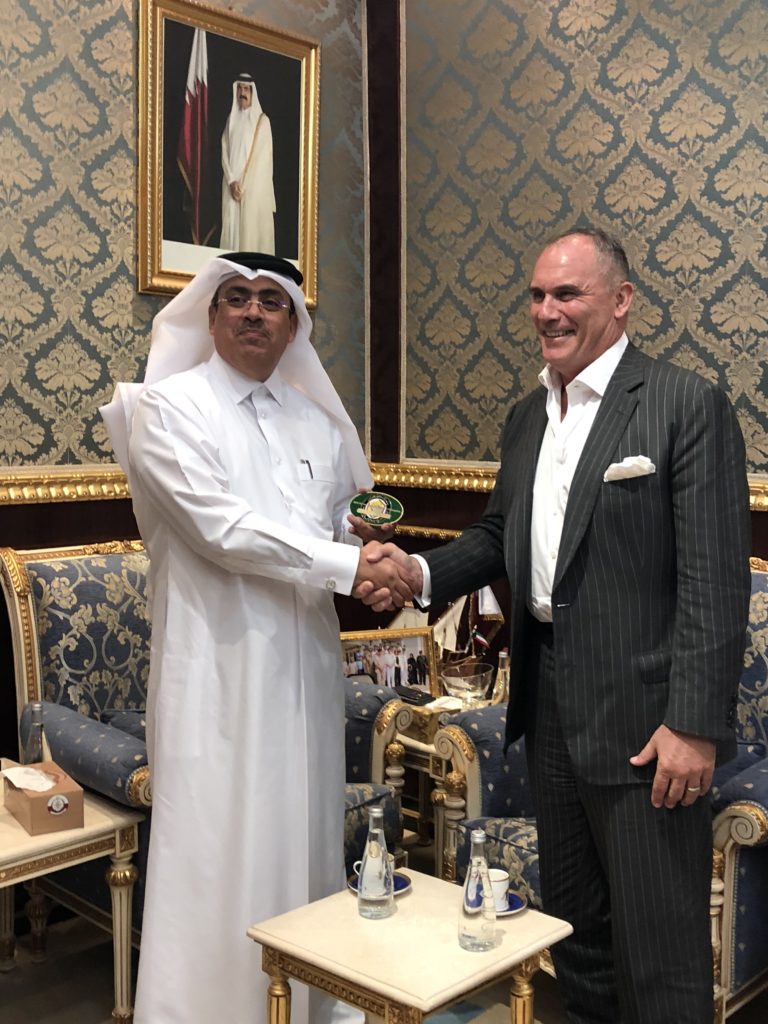 2018 GCC Air and Missile Defender of the Year Awarded Countries