Out in West Texas by the Rio Grande, on the border with Mexico is the world’s biggest force provider for air and missile defense systems and soldiers. Based in Fort Bliss, Texas is our nation’s largest Air and Missile Defense Command (AAMDC), the 32nd AAMDC. This command has four brigades, possessing 11 of our country’s 15 Patriot battalions and all of the four new THAAD batteries along with Short Range Air Defense Avenger and Counter Rocket and Artillery and Mortar (C-RAM) battalions. There are four brigades based throughout the country with the 69th at Fort Hood, Texas; the 108th at Fort Bragg, North Carolina; the 31st at Fort Sill, Oklahoma; and biggest Air and Missile Defense Brigade in the nation, the 11th “Imperial”  ADA Brigade, based here in Fort Bliss, Texas.

This collection of air and missile defense fire power overseen by the 32nd AAMDC is deployed and rotated to seven different countries and territories: the UAE, Kuwait, Qatar, Bahrain, and Jordan in CENTCOM; Turkey in EUCOM; and in the U.S. Territory of Guam in PACOM. Additionally, these forces maintain readiness in NORTHCOM in the United States to mobilize anywhere in the world at short notice. The 32nd AAMDC is accountable to the Combatant Commanders and the Air Force Component Commander of those Combatant Command Regions to provide protection, defense, and coupled with offensive system, to provide regional deterrence and stability.

Due to the constant demand around the world and limited amount of system capabilities, there is no other component of the U.S. military  that is so overburdened with its mission that it must require 12-month deployments rather than 9-month deployments to its soldiers, taking them away from their families and loved ones. Further unlike the norms for deployed combat soldiers,  these air and missile defenders have no two-week leave, no combat pay bonuses, and receive no combat patches for these deployments.

Regardless of the sequester and limited resources, there is no question that our nation, our Congress, the Department of Defense and our Army have the due responsibility to address this inequity to the men and women that serve our nation in this important and vital mission.  These are the honorable and selfless men and women who are committed to do their mission on behalf of our freedoms we cherish at home and do not complain about entitlement taken. We recognize these great soldiering men and women as true leaders, champions of defending our forward-based troops, our allies, and our nation back home.

As our nation moves towards our Christmas and holiday season, with our families and friends close to us, we must reflect on those that have given up this time with their families. We are extremely fortunate for their service and we thank the “Swift and Sure” of the 32nd AAMDC for their leadership of these men and women in keeping them safe and vigilant.

MDAA took time on your behalf to visit, recognize and appreciate these soldiers in the Patriot Battalions and THAAD Batteries performing their training, readiness and preparation for deployment around the world under the 32nd AAMDC and the 11th ADA Brigade at Fort Bliss, Texas this week. 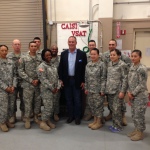 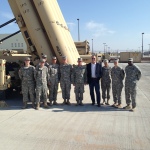 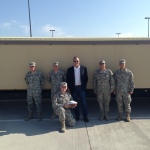 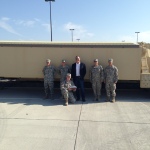 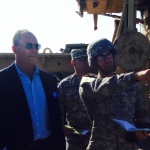