Standing Tall to All

The United States territory of Guam stands tall, unafraid, and alone as an island in the second island chain of the Pacific. A seven hour flight to Hawaii and a four hour flight to Japan, Guam has been built with strategic infrastructure to project air, sea, marine, and army power to support the national security of the United States over the past century. With the largest deep-water port staging area in the Pacific, the largest fuel storage area in the Pacific, the biggest ordinance storage area in the Pacific, and home base to U.S. nuclear-powered fast attack submarines, B1 and B-52 strategic bombers, global hawks, and refueling aircraft. Guam stands tall to all.

Five years ago, April 9, 2013, President Obama made the presidential decision to put forward the first Terminal High Altitude Area Defense (THAAD) Battery ever to be deployed as a direct strategic message to China and North Korea, that Guam and the U.S. retaliatory strategic nuclear strike capabilities based there will be defended from North Korean ballistic missiles. There was outcry by China and direct threats by North Korea that all fell on deaf ears as a limited THAAD Battery was initially deployed and made operational on Anderson Air Force Base as Task Force Talon. During the next five years, Task Force Talon gained invaluable lessons of a real-world mission, leading to efficiency and effectiveness that was directly applied along with equipment support to the second THAAD battery deployment to the Republic of Korea on March 6, 2017. Learning how to tame the jungle with Task Force Talon’s security forces and best defend the critical equipment, along with the launchers, took time to master. Equipment readiness in the tropics of the Pacific, with monsoons and saltwater, was learned and overcome. Isolation with a lack of direct battalion or brigade support, but instead with a direct support command to the Commander of the 94thArmy Air and Missile Defense Command (AAMDC) – in Honolulu, Hawaii, a day behind and 7 hours by flight is a challenge. A challenge that will be soon be relieved by the 38th Air Defense Artillery (ADA) Brigade stood up in Japan in October this year and will now become Task Force Talons direct support. The leadership of the Soldiers of Task Force Talon, who retain the highest levels of readiness and in depth makes this critical mission, the mission of the “Guardian Angel”.

MDAA has made an annual trip for the last four years to recognize this very special group of Soldiers at the battery level in a Guam Fiesta at their site and base. Last Wednesday we presented that recognition of excellence to the best in the battery and the security forces that defend them. They are one team and a great team that it is led by Lieutenant Colonel Johannes Castro.

2018 Guam Missile Defenders of the Year: 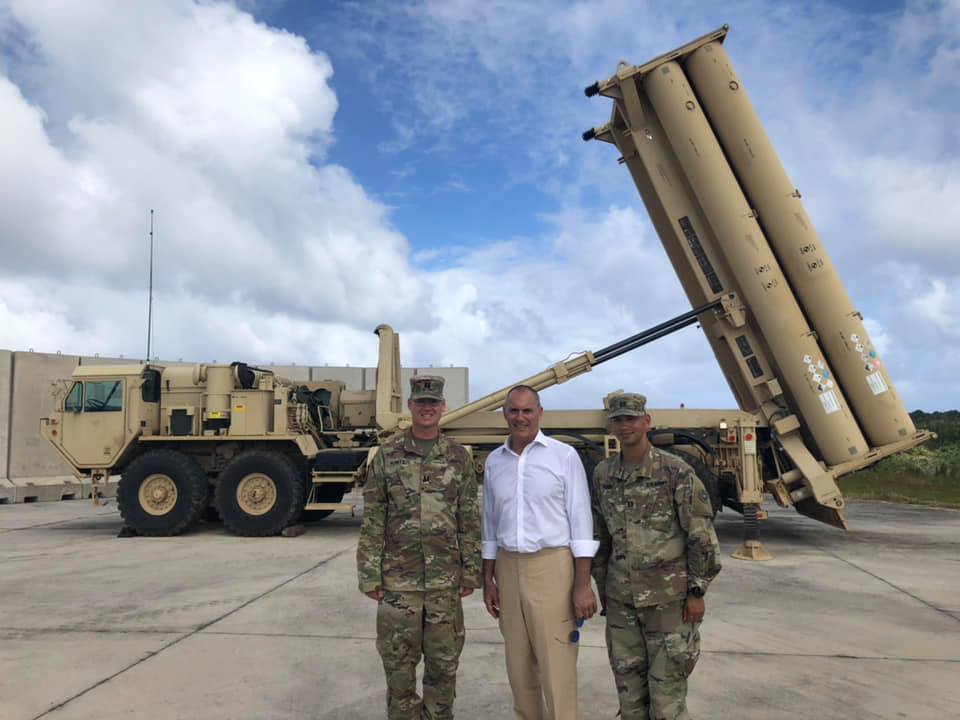 Riki with Soldiers from Task Force Talon in front of a THAAD launcher at Anderson AFB, Guam.