Because of its national priority and importance, last Friday, we led a round table community discussion in Colorado Springs, Colorado, with the local Congressman Representative Doug Lamborn on the Future of Space and Missile Defense. Colorado Springs is Home to USAF Space Command, the 100th Missile Defense Brigade that commands the GMD system, Schriever Air Force Base that operates the C2BMC for the GMD system, the 50th Space Wing which operates and supports 185 DoD satellites, and the 21st Space Wing, which provides missile warning and space control to unified combatant commanders worldwide. 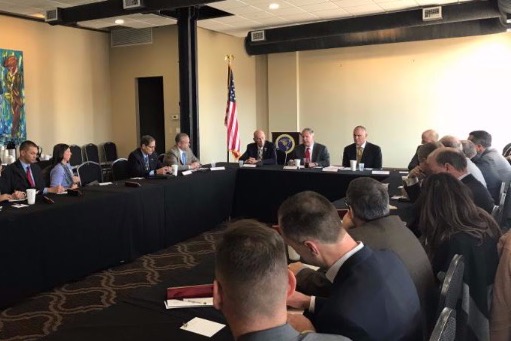 Riki with Rep. Doug Lamborn and other attendees at the roundtable discussion on the Future of Space and Missile Defense in Colorado Springs, Colorado on November 09, 2018.

A few points of consideration:

– Strategic imbalance is occurring regionally both in the Pacific and Europe with the near peers of China and Russia who are exploiting Space as a war fighting domain.

– Space is an official war fighting Domain as the near peer competitor of China has designated its military structure ahead of the United States to command and control Space as a War Fighting Domain and Command.

– Precursor and parallel, the Chinese build up of artificial islands and deployment of military capability on them in the South China Sea to control and deny access through international waters by granting permission or not to pass through; treating them as territorial waters is similar to how one can look at Space above their territory from their perspective.

– Space as a new domain for the United States that now has to be protected and denied from nations such as China that choose when and where to not respect international rules and freedom to operate in space. Chinese demonstrations of existing space weapons in the destruction of its own satellites and testing of advanced anti satellite capability is accepted as the norm of strategic operations.

– A new National Space Strategy has been put forward earlier this year with a policy that is being implemented by the President and the Secretary of Defense to create a national focus for U.S. Military forces for Space and Missile Defense. This new Space Force will start to come into reality next year with a new unified Space Combatant Command led by a four star to command the operations. Along with that, a new Space Development Agency (SDA) for acquisition will be created to be the rapid developer of new space systems. The new service is to be created by using the existing funding and manning currently spent by each of the U.S. Military services in Space operations, force functioning a singular truly joint force and eliminating stove pipe funding, developing and operating by the services that is inefficient to the U.S. tax payer to do the holistic manning, training and equipping for the war fighting of a U.S. Space Domain.

– With the advent of commercial space launchers and the tremendous reduction in costs to put small sized sensors into space, a new technology generation shift is taking place. There is little financial reason to have to buy the rocket launcher anymore as part of the cost that is challenged to stay on schedule and cost. It is a revolution for space access that gives the Military much faster, cheaper and quicker ways to put up capability in space. There is no better example and testament than the Space-based Kill Assessment (SKA) from MDA that is operational deployed today in Low Earth Orbit (LEO) of constellation satellites to do independent Kill Assessment of Ballistic Missile Intercepts to create more reliability and reduce the shot doctrine.

The new SDA of the Space Force will look to be addressing the lack of Discrimination Sensor Constellations in LEO and in Medium Earth Orbit that are required to best give persistent awareness of the Missile threats from ballistic, hypersonic and air breathing missiles. However it is the Command and Control system that is the most vital for the success of the Space CO COM as it has to fuse all the sensors that look into space from terrestrial to in space and provide accurate non-latent firing solutions to the effectors which has not yet been developed. A foundational C2 structure that is in place for making a space C2 a reality is the Missile Defense Agency’s C2BMC that brings all the sensors from space, sea, air and land to put forth the best firing solutions for the Ground Based Interceptor of the GMD system.

Colorado and Colorado Springs is the likely future for the center and command of Space as existing infrastructure and commands are in place to support the upcoming Space CO COM, Space Development Agency and Space Force.