March 7, 2018
Riki Ellison with air defense soldiers in front of an Avenger during the Roving Sands exercise on March 5, 2018.

In the long awaited reconstitution of the 2005 Roving Sands annual exercise, the last time our nation exercised a fully integrated combat training air and missile defense exercise, the United States Army – with its biggest force provider of air and missile defense capability and capacity – the 32nd Army Air and Missile Defense Command (AAMDC) concluded its ten day operational exercise in the roving sands of Texas and New Mexico this week. An exercise that replicated the complexity of the operational environment, with air and missile defense of the U.S. land component forward forces in combat that spanned over 3,500 kilometers against the realistic threat of today’s near peers with tactical ballistic missiles, 360 degree cruise missiles, fixed wing aircraft, and Unmanned Aerial Vehicles (UAVs) leveraging terrain to their benefit to disrupt and negate the forward land component forces in a contested environment.

Over 2,000 air defense soldiers pulled from Fort Bliss, Texas, Fort Hood, Texas and Fort Sill, Oklahoma with the 69th Air Defense Artillery (ADA) Brigade commanding the exercise. In the sands of Texas and New Mexico under the 69th Brigade Command were three Patriot Battalions – 1-43 ADA, 3-43 ADA, and 4-3 ADA – with 12 batteries, 12 radars, and 72 launchers, one Terminal High Altitude Area Defense (THAAD) Battery with six Launchers, and one Short-range Air Defense (SHORAD) battery with six Avengers, FIM-92 Stinger missiles, and one Sentinel radar. These capabilities had to be mobilized, set in place, supplied, perimeter defended, and full readiness of operation were grouped in the front of the fight, in the middle of the fight to cover both the front and the back of the fight with THAAD, and capabilities in the rear of the fight for support of command. 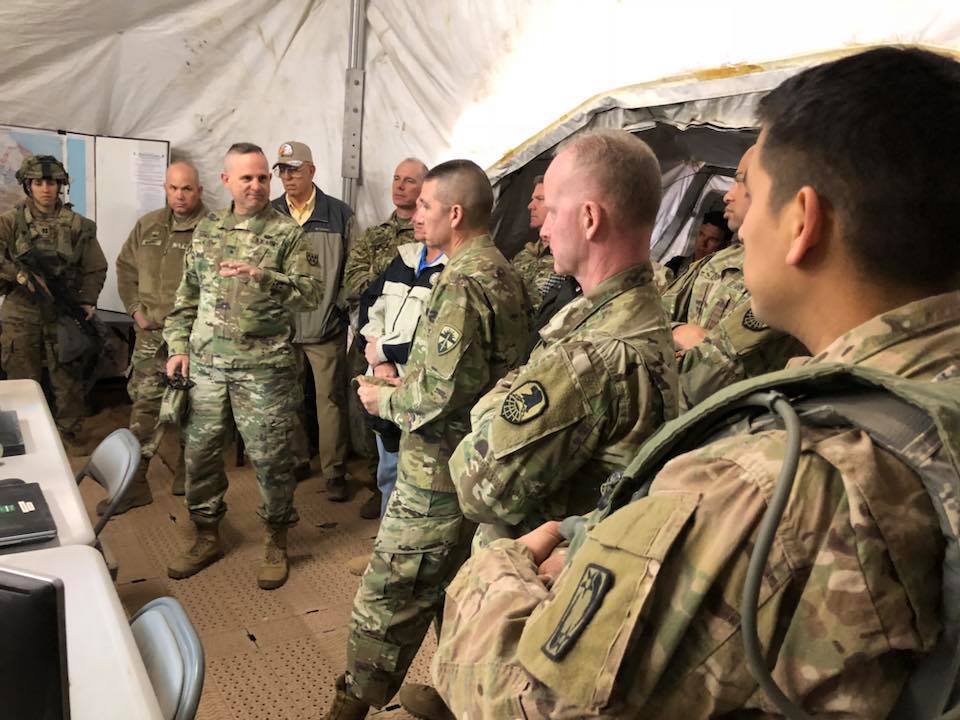 Roving Sands was a directed U.S. Army exclusive exercise that force functions leadership development and readiness like nothing else can do on the battlefield at the platoon Level, the battery Level, the battalion level, and the brigade level along with system integration between THAAD, Patriot, and SHORAD. The former, much more important than the latter, as history shows the odds are with you to win your fight based on leadership and readiness.

The 32nd AAMDC made up of four ADA Brigades – the 11th, the 69th, the 108th, and the 31st – all postured as a 24/7 global response force of their THAAD Battery, Patriot Battalion, and Avenger forces out of Fort Bliss, Texas to go anywhere in the world when ordered. The 32nd also supports the Central Command (CENTCOM) air and missile defense requirements in the United Arab Emirates, Qatar, Kuwait, Bahrain, and Jordon. They are also the force providers for additional air defense capabilities in Korea and in Europe when required by the Combatant Commands with Joint Chief approval. In addition, the 32nd AAMDC has the “testing” battalion 3-43 made up of the newest equipment, software, and hardware upgrades that are tested before going out to the global force.

While the U.S. AAMDC commands in the Pacific (94th) and Europe (10th) are challenged to have the environment conditions to exercise due to the threat or challenged by not having the necessary capacity of capability due to a conceded gap, the Roving Sands exercise should be a mandatory annual event providing the most ready and reliable fighting air and missile defense force of meeting Combatant Command contingency plans. A 2019 Roving Sands Exercise should be positioned to demonstrate the new Joint Emergent Operational Needs (JEON) requirements of the system such as Patriot and the Missile Segment Enhancement (MSE) engagement off the THAAD AN/TPY-2 radar on remote and further expand to provide another brigade for its rear defenses of major logistic hubs and air power projection to couple with the air and missile defense of the land component force.

The 2018 Roving Sands exercise brought forward air and missile defense needs to be developed and fielded. The exercise, like it was in 2005 and before, will also need to go joint in nature  without losing its leadership development and readiness for its Army Air Defense soldiers with the U.S. Air Force for air defense attack operations as a forward layer against standoff range cruise missiles and use of F-35 sensors for cuing and fire control of both cruise and tactical ballistic missile defenses.

On Monday afternoon, In the finale of the Roving Sands exercise, the 10th and 11th successful test intercepts of the Patriot Advanced Capability-3 (PAC-3) interceptors took place from the engagement of the best of firing crew of the 3-43 ADA test battalion at White Sands Missile Range.

MDAA was honored to be there on the Roving Sands this week in support and in awe of the greatness of our nation’s war fighters in air and missile defense, the soldiers of the platoons, the batteries, the battalions, and the Brigade.