Inside a prestigious U.S. Senate hearing room in the Dirksen Building, MDAA hosted and facilitated a roundtable discussion on the effect of budget uncertainty on missile defense programs last Wednesday. Our featured presenters and leaders of the discussion were Dr. Rob Soofer, appointed by the Chairman of the Senate Armed Services Committee Senator John McCain to be the lead staffer on missile defense; Mr. Tim Morrison, Counsel and lead staffer on missile defense appointed by Chairman of the House Armed Service Committee Representative Mac Thornberry; and  recently retired Brigadier General Ken Todorov, whose last position was the Deputy Director of the Missile Defense Agency.

The merits of missile defense and its acquisition, operations and maintenance and research and development budget requirements were put forward and discussed in light of the recent Bipartisan Budget Act of 2015, which requires a $5 billion dollar cut on overall defense spending from the 2016 National Defense Authorization Act. A primary point of the discussion was the role of the Missile Defense Agency and the alarming trend since 2007 of decreased spending on technology research, going from from $1.8 Billion to $500 million, in favor of increased spending on operations, maintenance and acquisition.  This also negatively coincides with an overall reduction in the MDA Budget, which went from a little over $9 billion to around $8 billion.

Our speakers suggested that returning MDA to its traditional research and development role could also assist in advancing future technologies that would allow U.S. missile defense systems to outpace the developing threats. They highlighted that the additional budget stability brought by the recent compromise could assist in a reallocation of resources to modernizing current parts of the Ground-based Midcourse Defense, such as the development of a Redesigned Kill Vehicle and Multiple Object Kill Vehicle, and investing in future technologies that push interceptors to the right side of the cost curve in relation to the missiles they combat. Our speakers suggested that these future efforts should span the entire missile track, including a discussion of boost phase programs. This investment would also allow the construction of additional sensor capabilities such as the Long Range Discrimination Radar and efforts to provide similar discrimination for the missile tracks of a developing Iranian long-range arsenal. Brigadier General Todorov also emphasized that infrastructure upgrades to existing GMD facilities would be a necessity to fielding an effective system.

The speakers pointed out that MDA could shift the acquisition, operations and maintenance of finished systems, sensors and interceptors of its expanding portfolio to the specific armed services, putting these systems in line with normal procurement. Once a new system is tested and proven, passing the final Milestone C, MDA is supposed to relinquish control to the military service that mans, pays for and operates it. MDA has several of these new Milestone C certified systems and interceptors within their budget that have yet to picked by their respective services, an action that could relieve and reduce funding stress on their budget. Countering this argument was that MDA was incentivizing this process by its success with these programs and that moving them to the services may decrease the attention paid to missile defense programs.

Left of launch and non-kinetic means of defeating ballistic, cruise and hypersonic threats were countered strongly with the firm belief and resolve that the United States President or Congress would be hesitant authorize a pre-emptive first strike upon a nation. The speakers emphasized that left of launch capabilities would not function as replacements for traditional right of launch capabilities in an effective missile defense. A question about integrated air and missile defense brought consensus that efforts should be continued in that direction.

This event was particularly timely in highlighting the importance of long term investment in important missile defense capabilities such as LRDR and RKV. It is notable that very few of these vital elements of our future missile defense systems discussed at our roundtable came under the axe when Congress decided where the final $5 billion in cuts to the older NDAA should come from. While it is disappointing that there were cuts on missile defense, it is of merit that what was cut in MDA’s budget by Congress was the procurement of Milestone C systems that the military services would normally have in their budgets, sending a clear message from Congress.  The 2016 cuts in procurement are funding for five THAAD interceptors, two SM-3 Block IB interceptors, and 30 Patriot Pac-3 interceptors that affect the missile defense inventories for CENTCOM, PACOM and EUCOM combatant commanders. It is of note that the future development of our missile defense capabilities in the 2016 budget has been preserved. The discussion facilitated by our MDAA roundtable was timely and important to the preservation of these vital programs. 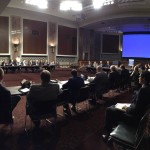 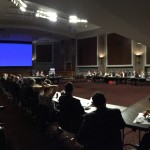 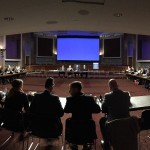 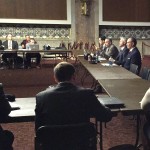 It’s For Real Over Riyadh

The President of the United States