Unannounced in Anchorage, Alaska, while refueling Air Force One yesterday, the United States President made particularly strong statements on the nation’s missile defense capabilities after returning from an unexpectedly shortened United States-North Korea Summit, held in Hanoi, Vietnam this week.

“We’re spending a tremendous amount of money now on missile technology and also missile defense technology, at my very strong urging. And what they’re able to do now is incredible. It’s like shooting a needle in the haystack. It’s incredible technology they have. And I said, “Upgrade it further and further. Advance it.” – President Trump, February 28, 2019

“We’ll also deploy 20 more ground-based interceptors to Fort Greeley, which will further strengthen our missile defense system. So important. Missile defense system is also being rebuilt very substantially. And we’re going to have the latest and the greatest.” – President Trump, February 28, 2019

“Our goal is very simple:  to ensure that we can monitor, detect, and destroy any missile launched against the United States, no matter what speed we’re talking about. Any missile.” – President Trump, February 28, 2019

Today, there are 40 Ground-Based Interceptors (GBIs)  fully operational and deployed in Alaska defending the United States’ Homeland 24/7 from North Korean nuclear Intercontinental Ballistic Missiles (ICBMs). Per the President’s statement, there is scheduled to be 60 GBIs deployed and fully operational in Alaska by 2023 and the new 20 GBIS will all have the new Redesigned Kill Vehicle (RKV)  along with the new Configuration-2 (C2) booster stack. What the President is implying on his last quote is that the United States is preparing to defend against hypersonic missiles in addition to ballistic and cruise missiles.

Earlier this week, General Terrence J. O’Shaughnessy, Commander of the United States Northern Command and Northern Command and North American Aerospace Defense Command (NORTHCOM and NORAD) and General John E. Hyten of the United States Strategic Command (STRATCOM) testified in front of Congress on homeland defense, space defense, and hypersonics  Below are a few of the notable quotes from their testimonies. 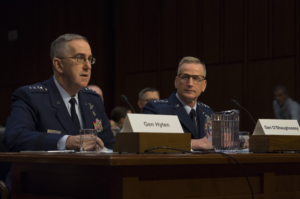 “As a result, it is clear that our homeland is not a sanctuary. Our mission to deter our adversaries is dependent on our ability to detect and ultimately defeat potential threats to our homeland. That effort cannot start too soon, given the fact that our adversaries are already developing and testing advanced weapons specifically intended to avoid detection in order to hold targets in the homeland at constant risk.” – General O’Shaughnessy, February 26, 2019

“But it’s also absolutely going to have to include space and we really need to accelerate our work to put sensors in space that can help us understand the domain both in the sea, on the sea and in the air of the threats that are coming towards our homeland, in particular, the Arctic is an area that we really need to focus on and really look at investing.” – General Hyten, February 26, 2019

“But there’s not enough islands in the world to build a radar to defend every avenue, therefore, we have to go to space. And we can go to space, now in an affordable way with distributed constellations that can look down and characterize that threat in a global perspective, so we can see them wherever they come from. That’s the direction we need to go.” – General Hyten, February 26, 2019

“And so in order to do that, though, it’s going to take an investment in just the areas that you mentioned. We have to have our own hypersonic capability and we also have to have the ability to defend against those – those advanced threats. ” – General O’Shaughnessy, February 26, 2019

“So our defense against hypersonic is our nuclear deterrent. If somebody attacks us with a nuclear hypersonic capability, we have the ability to respond. Now it’s important for us to be able to track that, to understand where it comes from, so if you – if you look at the way a hypersonic missile works, the first phase is ballistic, but it’s a fairly short phase. So it’s a shorter period of time, but ballistic missile’s roughly 30 minutes, a hypersonic weapon depending on the design could be half of that depending on where it’s launched from the platform, it could be even less than that.” – General Hyten, February 26, 2019

Missile defense remains vital to making our nation and world a safer place.