When asked by Senator McCain about what he viewed as the greatest impact sequestration would have on his command, Admiral Gortney replied:

“Because the services can only generate the revenue by going into readiness, or delaying delivery of a capability; the Missile Defense Agency does not have a readiness account that they can go to, so they’re going to have to go to their new starts. They’ll have to put the Long Range Discrimination Radar, the improvements to the advanced kill vehicle and multi-object kill vehicle, they’ll have to put those on hold and delay the ability for them to field those capabilities which allows us to outpace the growing proliferation of ballistic missiles.”

Admiral Gortney later identified the need to continue developing sensor capability as a top priority in his response to a question from Senator Jack Reed about what he viewed as the priorities for national missile defense.

“My priorities are completely aligned with Admiral Syring’s from the Missile Defense Agency, and the priorities are actually concurrent priorities; all three have to be taken into account. The first is we need to continue to improve our sensors; the sensors are the ability for us to discriminate and track as early as possible to be able to defeat the threat. The second is we need to enhance the lethality of our kill vehicles, it is a very expensive proposition to shoot a rocket with a rocket and so we want every one of our kill vehicles to be as effective and as lethal as possible and as well as the means to develop other ways that we can get more kill vehicles into space. Last is, as in any weapons system you need to invest in the sustainment piece of it so that all of, it’s a system of system, so that all of the systems are at their pique physical condition and that includes the ability for us to test and exercise them, and they all have to be done concurrently.”

“Our BMD capability relies on a series of infrared space sensors as well as land and sea-based radars for targeting. This year, a second AN/TPY-2 radar was brought on-line in Japan that improves our ability to persistently track potential threats to the homeland originating from East Asia.

Like everything we do in defense of the homeland, many of the systems and sensors we rely on reside in other AORs, which makes developing partnerships between MDA, USPACOM, USSTRATCOM, and USEUCOM critical. This includes developing and deploying Long Range Discrimination Radar systems for more efficient and time-sensitive BMD. The Sea-Based X- Band Radar, still considered to be in test and development, provides unique discrimination and tracking capabilities that are unavailable in current operational systems. I believe we must continue to invest in these types of emerging technology BMD capabilities to counter tomorrow’s missile threats. Engaging a target that is flying over 15,000 miles per hour in space with a kill vehicle that is roughly the size and weight of a basic military trainee’s foot locker continues to expand the limits of what is technically possible.”

Watch the hearing in its entirety here.

MDAA will explore this topic in an open, roundtable discussion on U.S. Missile Defense Sensors. Sensors in space, air, on land and at sea play the vital role in the tracking, discrimination and providing the firing solutions for our missile defense systems. The sensors provide the essential information that exponentially boosts the confidence and reliability of our nation’s missile defenses.

This event will provide the opportunity to speak directly with recently retired military commanders with expertise on this important but often overlooked topic. These leaders have experience in variety of regions and commands, including U.S. NORAD/NORTHCOM, U.S. STRATCOM, and the Joint Chiefs of Staff. With decades of direct experience in missile defense, they offer a candid, unbiased, and non-partisan view on the requirements for missile defense sensors.

Lunch will be provided.

Seating is limited, so please RSVP at aromero@missiledefenseadvocacy.org. 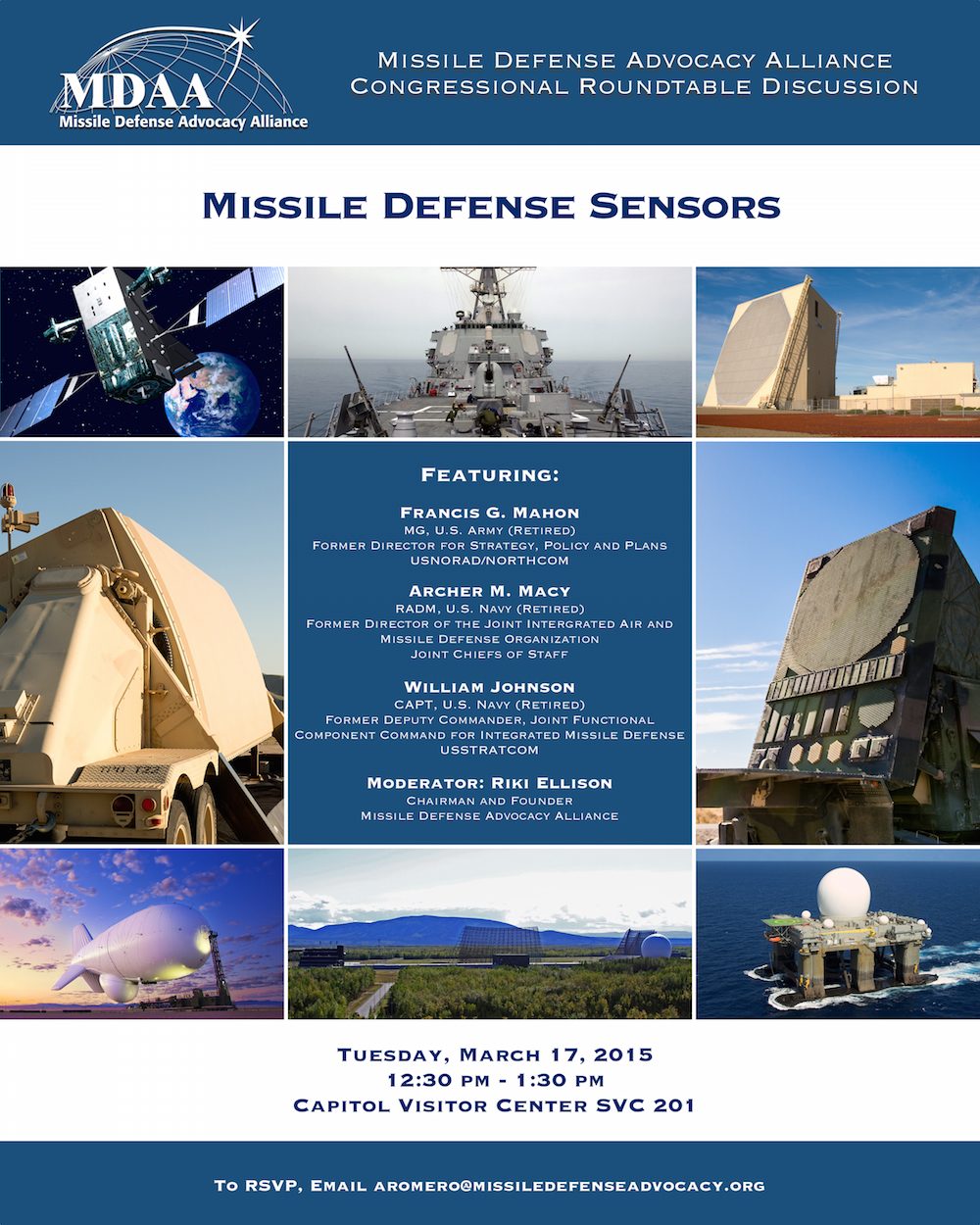