This week, MDAA held its fourth Congressional Roundtable Discussion on Capitol Hill, focusing on missile defense in Europe. Our speakers at this event were Counselor Alexander Trofimov, the Political and Military Affairs Counselor from the Russian Embassy for the Russian Federation, Ambassador Robert Joseph, former Special Envoy on Nuclear Nonproliferation and Under Secretary of State for Arms Control and International Security, and former Commander of the U.S. Army Space and Missile Defense Command LTG (ret) Richard Formica.

Missile defense in Europe has been the focus of contentious debate between Russia and the United States over the past decade. Increased U.S. and NATO missile and air defense deployments in Europe is being brought forth as a viable option in light of recent Russian aggression in the Ukraine and military buildup on its borders with eastern Europe and the Baltic states. Russian opposition to U.S. and NATO missile defenses is becoming more vocal and being used to justify its buildup of short-range cruise and ballistic missiles on its borders with NATO Europe. This crescendo of wills, political gestures and high stake military poker is playing out as the United States moves to fully deploy and operate a self- 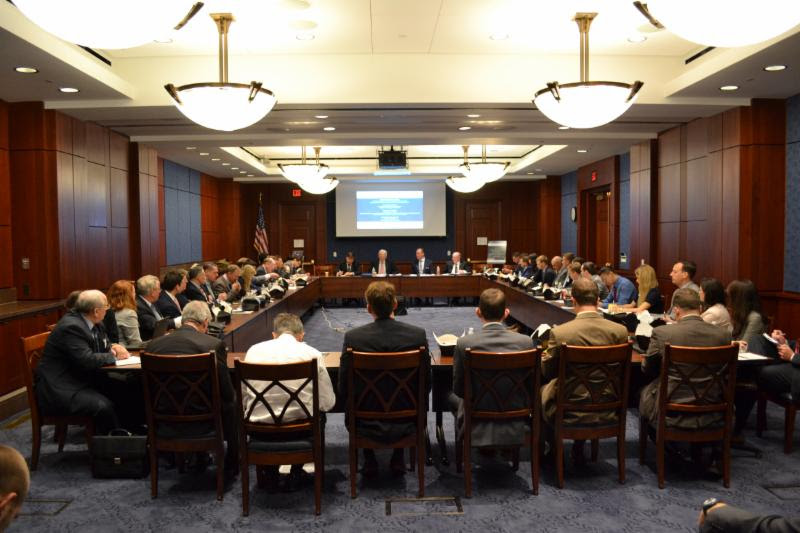 contained missile defense system against medium and intermediate range missiles against Iran in Deveselu, Romania by the end of this year.

This system is called Aegis Ashore, and will be operated by around 100 American sailors and officers. It will be equipped with a SPY-1 radar and the new Baseline 9 Aegis fire control and processing system with SM-3 Block IB interceptors.  Another Aegis Ashore system is planned to be deployed in Poland in 2018. This system will have a much longer ranged interceptor called the SM-3 Block IIA, currently being co-developed by the United States and Japan. Both these systems have software and hardware configurations built in that restrict any other missiles and missions but these two types of defensive missile interceptors and its mission to defend Europe from Iran.

The plan and policy to construct these two missile defense sites to defend against Iran was put forward by President Obama in 2009 and approved by NATO as part of his European Phased Adaptive Approach (EPAA). Until 2013, a component of EPAA was to have a long range ICBM interceptor capability to defend the United States homeland from these forward based Aegis Ashore sites in eastern Europe. This new interceptor, the SM-3 IIB, was canceled in 2013. As a result, this system can protect neither the U.S. homeland nor Europe from an ICBM missile that can fly over the system. This is due to the diameters and length limitations of the vertical launch tubes of the Aegis Ballistic Missile Defense system that is being employed as an Aegis Ashore Site. These size restrictions limit the amount of solid rocket propellant for the necessary speed and range to intercept an ICBM class missile.

The Russians state that the Aegis Ashore System being deployed in Europe is an INF treaty violation and believe it could be used as an offensive platform to fire Tomahawk cruise missiles into Russia. The Russians also state that there is no Iranian long-range, intermediate or medium range nuclear ballistic threat to Europe in capability or in intent. They also expressed concern that cooperative efforts and dialog on missile defense between our two nations have stopped.

This background sets the stage for the MDAA Congressional Roundtable discussion, and the exchange ideas and civil debate that ensued. To avoid any misinterpretation, we are providing you with the full, verbatim transcript of the event.

Accelerate and Change, or Lose

Say Something that Says Something

A Marriage Made in Space