It’s on in Europe

Last weekend off the shores of the Black Sea at the M.K. Air Base in Romania, the United States Army Europe led a coalition of ten NATO countries participating in one of the biggest land air and missile defense exercises of this century – Tobruq Legacy. It is both historic and significant, as eight of the ten participating NATO nations were from Eastern Europe – that were all part of the Soviet Union prior to 1989 – bringing a vast diversity of air defense systems to include Russian produced ones with different operating, command and control procedures. This exercise fused together 22 different land based sensors, located in three large operating areas in Lithuania, Czech Republic and Romania in this exercise to provide the complete air picture to NATO for the efficiency and confidence of firing solutions. It also fused both ballistic missile defense with air defense in this regional exercise, with the intent that they are inseparable in the defense of national borders, forward operating areas, staging areas and critical high priority areas. 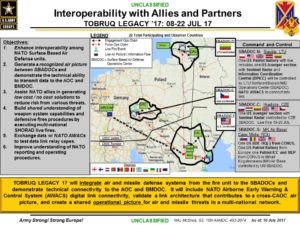 We were able to honor and recognize each of those ten nations in Romania, and their very best of the best air and missile defenders, bringing the team together in celebration of winning with the diversity and strength of ten countries in associating winners with winners.

Heroes of the Battle 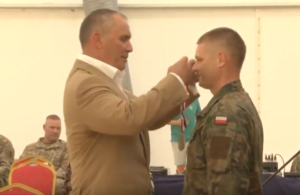 The success of this interoperable and integrated accumulation of NATO allied air defense in the 2017 Tobruq exercise, brings great trust in excelling as a team to bring forward confidence, reliability of the mission to defend NATO air space and efficiency of collective resources to multiply force projection significantly.

These linear land based air defense capabilities, that are shared amongst the ten NATO participating countries and are manned by Air Force and Army units, are the building foundation blocks to maximize the full potential of force by becoming non-linear and cross domain fires capable. Bringing forward NATO naval air and missile defense capability and capacity throughout Europe, to include sensor integration with processors to engage and launch off of remote sensors and remote interceptor platforms is a force multiplier. This also applies to the NATO air forces that command the mission of air defense from command and control, to sensor integration for the complete air picture to air platform capability to sensor and intercept air breathing threats.

Over the recent years, Russian demonstration in the Ukraine and in Syria on overwhelming air superiority in demolishing tank brigades (Link to “Russia’s New Generation Warfare” by Phillip Karber and Joshua Thibeault) from UAS to Cruise Missiles in standoff ranges, complexity and capacity is evident in their modernization and tactics. Russian Anti-Access and Area denial (A2/AD) capability deployed in Kaliningrad extends over NATO countries airspace and can directly challenge NATO air space and the territory it extends over, should a crisis lead to a confrontation.

Upcoming NATO air defense exercises in each of the service domains are forthcoming and continue to develop in a linear approach. (Formidable Shield Maritime Exercise in October off the waters in Scotland, Crete Live Fire in November and Air Force exercise in January). An overall joint, integrated, cross linear and cross domain exercise with all capabilities of the air defense platforms for NATO Europe needs to be exercised to have efficiency of force, resources and strength diversity of contributions in deployment of air defenses to defend NATO Europe.

The threat to NATO Europe air superiority and supremacy is being challenged with overmatching capability and capacity.  The answer to best deter that current and future threat is non-linear cross domain capability from our NATO allied force in the air and missile defense mission to deter, defend and enable our offensive deterrence forces.