It’s for Real with Japan

November 18, 2019
Riki Ellison at the Air Defense Command Headquarters at Yokota Air Base, Japan on November 14, 2019.

Japan – the length of the Eastern United States, with an extension of its territory into the middle of the East China Sea – is a geographical and political buttress that parallels China, Russia, and North Korea. The three most capable and threatening nations to the status quo of the world order and to the national security of the United States of America. Japan is an absolute ally, that is all in with the United States as it relies solely on U.S. offensive forces to include nuclear for the defense of its territory and status quo in the Asia region. Japan constitutionally is not permitted to have military projection of power regional and strategic offensive force and strike capabilities.

China’s aggressiveness and it’s One Belt, One Road policy openly declare its intent to be the dominate power of the world puts tremendous pressure  on Japan and its long term self-interests. Russia following with aggressive behavior in the region and teaming up with China on airspace intrusions and supply of its Iskander missiles and ballistic missile technology to North Korea who have recently tested them. North Korea increasingly threatens Japan and is now a regional nuclear power that has launched successful ballistic missiles tests over Japan and its territories. The accumulation of all these demonstrated actions, that started with the Memorandum of Understanding (MOU) between the U.S. and Japan on missile defense with President Reagan in 1984 and the 1998 North Korean space launch vehicle test over Japan, has driven Japan to be one of the most capable missile defense nations with the most capacity, the most investment, and a significant integrated partnership with the United States on development and deployment of missile defense systems across its Navy, Army, and Air Force in and around its territories.

Strategic messaging speaks loudly as last Thursday in Tokyo, Japan the Chairman of the Joint Chiefs of Staff for the United States, General Mark Milley on his first overseas trip stated “It [the Pacific] is the number 1 regional priority for the United States military.” A shift of U.S. military power projection priority that matches the 2018 National Defense Strategy laid out by former Secretary of Defense, James Mattis. 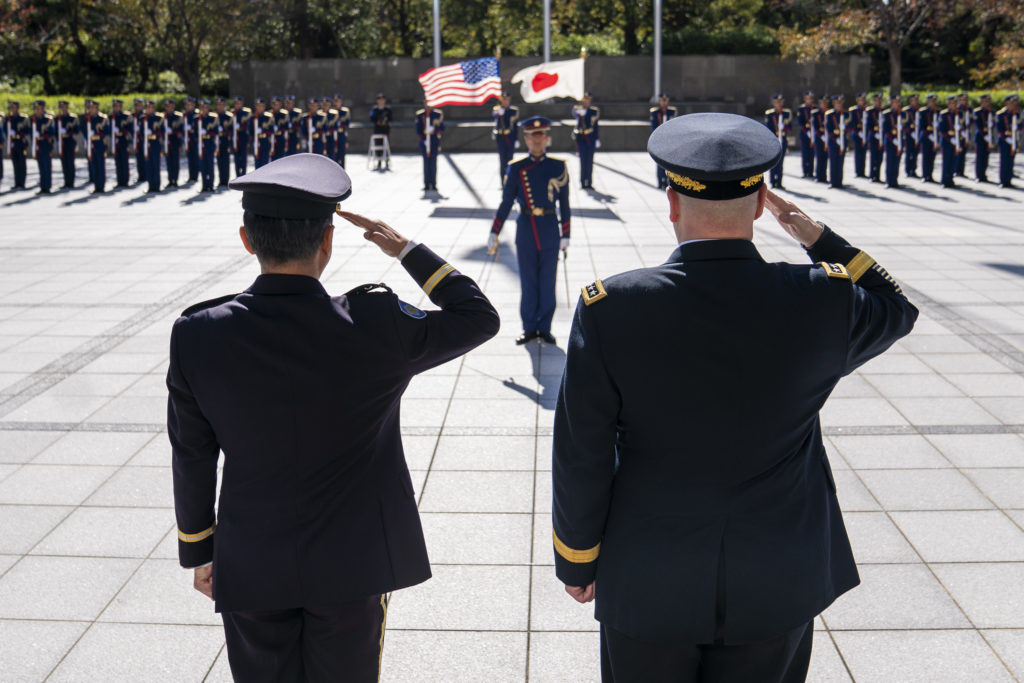 With the advent of strategic and regional Chinese Hypersonic Glide Vehicles (HGVs), a Chinese capacity overmatch of regional ballistic missiles, an overmatch of maneuverable and over the horizon cruise missiles, numerous platforms to launch from in several domains, and the deployment of strike missiles on its artificial islands in the South China Sea creates an impeding complex power projection to control this region of the Pacific. A situation that Japan, the United States, and regional allies in the Pacific must confront, invest, and change with efficient offensive and defensive technologies that enable joint and integrated multi-domain systems to force divestment of the Chinese offensive forces to maintain the status quo.

Japan invests today 0.85% of its Gross Domestic Product (GDP), way below 2% for its defense, and pays an addition of around $2.5 billion a year to the United States for U.S. Forces in Japan. The cost to the United States for its forces in Japan annually is around $12 to $13 billion a year, a significant shortfall that U.S. taxpayers pay for and continue to pay for. Similar to Germany, they both have booming economies and are top ten economies of the world that represent a tremendous success of U.S. policy of World War II reconstruction of two nations that were completely destroyed and are now leaders of Western capitalism and great examples of Western democracies. Japan and Germany must contribute more to their defenses and be more integrated with the United States.

The buttress of assured deterrence for this region by the United States is its ability first and foremost to defend the United States homeland and its strategic capabilities, which includes the current missile defense of the United States from ballistic missiles, cruise missiles, and future HGVs. This must be mixed with offensive strike capabilities to change the investment and power projection of China, Russia, and North Korea.