It’s All About the Base

Last week, we visited the most important United States Army Battalion, as noticed by General Miley, the Chief of the United States Army, the 49th Missile Defense Battalion located in Fort Greely, Alaska that operates and defends the 40 Ground Based Intercontinental Ballistic Missile (ICBM) Interceptors deployed there, defending all 50 States and the population of the United States of America. There are close to 225 soldiers that make up the five fire control crews and the 24/7 force protection of the silos and launching facilities within the base. These brave, resilient, all weather, and all terrain men and women active duty soldiers that serve, patrol, and operate in temperatures of -45 degrees, are what keeps America safe and sound from North Korea. Inside these three missile fields are three generations of ICBM interceptors, tucked inside of silos in temperature-controlled environments that are built to launch and handle the worst conditions Alaska can bring. Their reliability in defeating today’s limited number of North Korean ICBM capable and tested missile systems is high, through the validated testing, multiple discrimination sensors, and with a multiple shot doctrine. It is the thousands upon thousands of simulated North Korean ICBM attack scenarios that the fire control crew soldiers of the 49th Missile Defense Battalion have exercised and continue to exercise every day to bring confidence to the execution of the ground-based missile defense system. Great respect and great honor goes to all of them for the heroic duty and service of defending America.

The GMD system is limited in numbers at 44 Ground-Based Interceptors (GBIs) with the existing early warning, tracking, and discrimination sensors. Not until 2023, will there be one addition missile field of 20 GBIs. These will all be the newest generation interceptor – the modular produced Redesigned Kill Vehicle (RKV) GBI with a new C2 booster stack which requires several successful intercept tests – the first test scheduled for next year – to begin their first RKV emplacement in 2021 in Fort Greely if everything goes as scheduled. 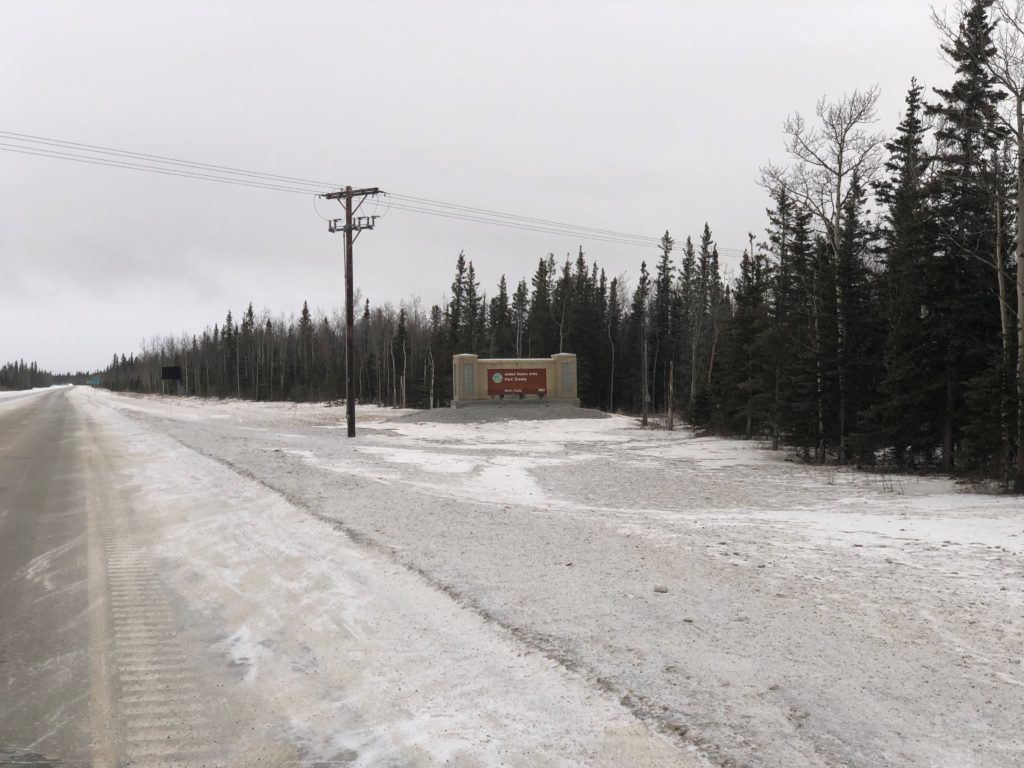 Outside the main gate of Ft. Greely.

Fort Greely has been surveyed and prepped to hold five missile fields of 20 GBIs, for a total 100 GBIs. There is one more potential missile field of 20 available and opportunity to finish populating the current missile fields to their maximum capacity to put forward a full capacity of 100 GBIs at Fort Greely, Alaska. Treaty rules with Russia disallow additional GBI silos in Vandenberg Air Force Base (AFB), which is currently maxed out with four GBIs and silos, in addition to the testing silo. The only other growth for GBIs would be new construction requiring environmental impact studies of a third site in the lower 48 states, to give a more robust defense against both North Korea and Iran, which has been requested by Congress for survey, study and selection by MDA. Three sites are being looked at in Michigan, Ohio, and New York, with the most promising third GBI site being at Fort Custer, Michigan. Adding to an increase of GBI capacity for the United States in this timeframe is a concept of having a “transportable” GBIs that could be positioned in environmentally controlled transportable launchers, that could be dispersed from a central location to pre-approved launching sites on military bases throughout the nation and possibly overseas – revisiting a European location for a forward-based, first intercept opportunity against a future Iranian ICBM threat.

All of these new and old GBIs will be outfitted to have an option of two stages or three stages for more Battle space.

For it is all about the base of ICBM interceptor capability for the defense of the U.S.  and increasing that base capacity to defeat the proliferating ICBM threats to the United States. There is no other proven and tested system today to defeat ICBMs than the GBI and new technologies that require tremendous investment, testing, and operational deployment are years and years away. For as North Korea continues to proliferate its nuclear ballistic missile capability, there is a much bigger national security issue than North Korea as Henry Kissinger stated in testimony yesterday.

“My fundamental concern about the nuclear program of Korea is not the threat it poses to the territory of the United States, significant as it is,” Kissinger told the Senate Armed Services Committee. “My most immediate concern is the following: If North Korea still possesses a military nuclear capability in some finite time, the impact on the proliferation of nuclear weapons might be fundamental. Because if North Korea could keep its capability in the face of opposition by China and the United States, and the disapproval of the rest of the world, other countries will, are bound to feel that this is the way for achieving international prominence and the upper hand in international disputes. And then we’re living in a new world in which technically competent countries with adequate command structures are possessing nuclear weapons in an area in which there are considerable national disagreements,” – Kissinger

I’m all ‘bout that base.