In ADA We Trust

In Ft. Sill, Oklahoma, the training, the schooling and indoctrination of every United States Soldier and Officer in the Air Defense Artillery (ADA) Branch happens here under the 30th ADA Brigade and the command of the Fires Center of Excellence. The schooling provides first duty assignment and follow on advanced expertise training for the Army’s four air and missile defense systems that are forward deployed and  in full operations today; the Terminal High Altitude Area Defense (THAAD), Patriot , Avenger, and Counter-Rocket, Artillery, and Mortar (C-RAM). Adding to the Army air defense mix next year will be the two new Iron Dome batteries for fixed site air and cruise missile defense and the new Mobile Short-Range Air Defense (M-SHORAD) – a Stryker-equipped mobile air defense system that will have directed energy lasers for the defense of Army Brigade Combat Teams in Europe. The ADA Schoolhouse is also responsible for upgrading the newest equipment, software, and hardware and training the soldiers throughout the force. All Patriot units forward deployed were recently upgraded with the new Missile Segment Enhancement (MSE) interceptors and Post Deployment Build 8 (PDB-8).

The true value of the ADA Schoolhouse is creating sustainability, modernization, and preventing capability and manpower obsolescence to maintain and project force to operate the critical mission of deterrence and defense in combat for the joint services and nation for current and future generations. Very few nations have Air Defense Schools and do not have the foundation, technical expertise, and knowledge to indigenously develop, sustain, modernize, and grow their air defense forces. Instead they rely on the U.S. Foreign Military Sales (FMS) and the U.S. ADA Schoolhouse for a near term fix and are challenged to sustain and modernize their air and missile defense forces with the pace of the threat they face.

The United States Army’s objectives for air and missile defense are for three phases to set the conditions to win in a combat fight – the Tactical up front layer, the close by Operational Support layer, and the further away Strategic Layer. Due to the critical need to have air and missile defense capabilities in any potential battle or crisis prior to conflict – in full support of the combat operations at the strategic, operational, and tactical layers – Army ADA units are always deployed first and first to fire as well as have the longest forward deployment time for their soldiers at 12 months over the rest of the combat operational branches who forward deploy for nine months. This began in 1990 in the First Gulf War and was done again in the Second Gulf War – both with the 11th Air Defense Artillery Brigade – and continues today in the Middle East with the limited U.S. capacity of air defense capability of the 32nd Army Air and Missile Defense Command (AAMDC). The recent Unmanned Aerial Vehicle (UAV) and cruise missile attack on the Saudi Arabia oil fields has now caused the United States to forward deploy additional Patriot Batteries that were just pulled from the Middle East a year ago to provide relief to the Soldiers and equipment of the Patriot Force deployed around the world. These existing U.S. Patriot deployments in the Middle East and new ones coming forward from the United States are positioned for the three phases of potential conflict against Iran to defend strategic U.S. forward air projection bases, as well as operational and tactical air projection bases, directly across the Arabian Sea in the Gulf from Iran. U.S. Army air and missile defense in the Middle East are already in place and being further out in place first to set conditions to win against Iran to the region and U.S. bases located there. 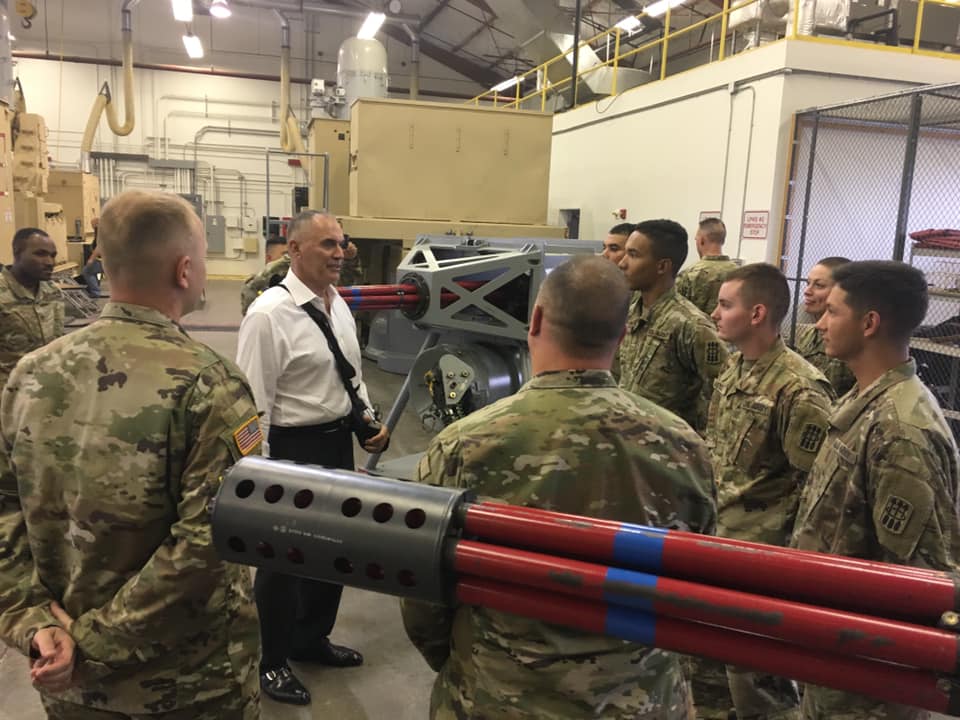 Visiting with ADA Soldiers at the C-RAM training facility at Ft. Sill, Oklahoma on September 11, 2019.

The missile threat as the world witnessed with Iran is developing into a 360 degree threat capability that is interwoven with cruise, ballistic, UAVs, and soon to be hypersonic. This new threat is over the horizon, with small radar profiles, and launched as swarm of missiles. The Army ADA Schoolhouse is the critical foundational solution in doctrine and modernization for the defense from these layered 360 degree threats.

Two of the new systems being introduced in 2022 will be the new 360 degree radar, the Lower-Tier Air and Missile Defense Sensor (LTAMDS) and the engage on remote/launch on remote (EOR/LOR) Army system of Integrated Air and Missile Defense Battle Command System (IBCS) that further enables 360 degree defense with engagement and placement of multiple types of radars fused together for the best firing solutions.

In the ADA Schoolhouse, the nation and the allies trust.