May 31, 2017
Launch of a Ground-Based Interceptor from Vandenberg Air Force Base yesterday during the first ever intercept test of an ICBM target

The first ever and a historic first in the world of an intercept of an ICBM (intercontinental ballistic missile) missile took place yesterday over the middle of the Pacific Ocean demonstrating clear capability by the United States to defeat and destroy mankind’s most powerful weapon, the ICBM. This remarkable and world notable achievement establishes confidence and security for the population of the United States against being held hostage or at the will of threatening nuclear ICBM capable rouge nation states. The United States’ intercept yesterday deters and negates North Korea’s ICBM capability and gives the Republic of Korea and Japan confidence on assured deterrence of their nations by the United States, thereby curbing nuclear proliferation in this region. This historic intercept has worldwide ramifications of strategic deterrence to Iran and other nations as it too provides the United States with strategic flexibility enabling options to defuse escalating nuclear crisis situations in being able to defend its nation and population.

“Let me share with you a vision of the future which offers hope. It is that we embark on a program to counter the awesome Soviet missile threat with measures that are defensive. Let us turn to the very strengths in technology that spawned our great industrial base and that have given us the quality of life we enjoy today.

What if free people could live secure in the knowledge that their security did not rest upon the threat of instant U.S. retaliation to deter a nuclear attack, that we could intercept and destroy strategic ballistic missiles before they reached our own soil or that of our allies?

I know this is a formidable, technical task, one that may not be accomplished before the end of the century. Yet, current technology has attained a level of sophistication where it’s reasonable for us to begin this effort. It will take years, probably decades of efforts on many fronts. There will be failures and setbacks, just as there will be successes and breakthroughs. And as we proceed, we must remain constant in preserving the nuclear deterrent and maintaining a solid capability for flexible response. But isn’t it worth every investment necessary to free the world from the threat of nuclear war? We know it is.” 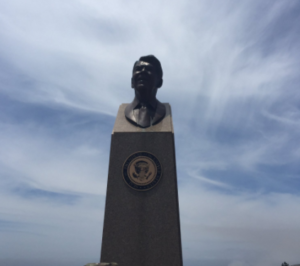 The successful ICBM intercept test provided a replication of a North Korea ICBM threat of a three-staged solid fuel missile with a payload of mock nuclear reentry weapon going at comparable speed, distance and angle into the United States homeland that was detected, discriminated and intercepted by the United States’ deployed capabilities that defend the United States homeland today. Thereby validating confidence and testimony from the NORTHCOM Combatant Commander General Robinson (link) who is in command of the defense of North America in the overall GMD system to defend the population and territory from the North Korean threat.

This test leveraged the United States’ space sensors for initial track, then used a forward based TPY-2 radar for the cueing of the Sea-Based X-band (SBX) radar, which tracked and discriminated the ICBM target providing information in flight to the new GBI (Ground-Based Interceptor) made up of a new, first flown C2 rocket booster along with a further upgraded CE-II Block 1 exo-atmospheric kill vehicle that was successfully tested a year ago (link). This third-generation interceptor with its modernized and new avionics three-stage booster, sensors and kill vehicle put itself in the exact right position ahead of the ICBM target to create a kinetic energy intercept high in space during the midcourse phase using the massive speeds of collision to completely destroy the target.

This third-generation interceptor will now fill up the last eight silos in Fort Greely, Alaska by the end of the year to reach the mandated total of 44 GBIs. With four GBIs in California at Vandenburg AFB and 40 at Fort Greely, the fleet is made up of a mixture of three generations of GBIs with the first and oldest making up the majority of the fleet. All three versions have been separately tested and proven and the third generation would now have the best reliability. The entire interceptor fleet is worked together and the reliability of any one GBI reflects the reliability of the combined fleet. This reliability is clearly demonstrated to defeat the current and near-term North Korean threat to the U.S. homeland. The two primary sensors used in this test reflect the forward based TPY-2 radars in Japan and the SBX, which is the primary sensor for the defense of Hawaii from North Korea and provides additional support for the U.S. homeland.

This fleet of 44 GBIs will require around five additional third-generation GBIs to sustain its numbers until the production of the fourth-generation GBI kill vehicle called the RKV (Redesigned Kill Vehicle) coupled with the C2 rocket booster is deployed beginning in 2021, with an order of four today. To mitigate risk for the nation from both North Korea and Iran during this time period would require getting all available CE-II Block 1 builds done with new C2 boosters, consider replacing first generation old boosters with the new C2 boosters to ready them for the RKV and expand missile fields one and two in Fort Greely Alaska to their full capacity as well as look to double the GBI silos at Vandenburg AFB. The GBI fleet should be increased to close to 100 with the new RKV and eventually MOKV (Multi-Object Kill Vehicle) that would considerably reduce the cost of the GBIs to 50 percent of what they cost today.

Yesterday was a victory for the nation and the world in making them both safer with a proven breakthrough achievement that was operated by the nation’s warfighters and developed by the Missile Defense Agency and the civilian contractors that engineered this remarkable historic achievement. The thousands of men and women led by Vice Admiral James Syring changed the world.