Going Big and Being Big

A significant two weeks for Integrated Air and Missile Defense (IAMD) took place in Europe, with the historic magnitude of Poland air and missile defense capacity and capability purchase that directly confronts the Russian missile threat to Poland and NATO Europe. Romania, Sweden, the Baltic States, and other European countries are in step to follow Poland’s leadership with direct IAMD capability to defend and to deter the Russian threat. A United States $4.75 billion letter of agreement with Poland, that in the first phase would look to include four radars, 16 Patriot launchers with 12 tubes per launcher, and up to 200 Missile Segment Enhancement (MSE) interceptors – making these four Patriot units fully capable with reload and Initial Operational Capability (IOC) as soon as 2020. These Poland Patriot units will be the first in the world to use the Integrated Air and Missile Defense Battle Command System (IBCS), being deployed without the Patriot’s Information and Coordination Central (ICC) vehicles that normally enable battalion and above command and control automatic engagement. The second phase of the agreement, that Poland is expected to complete by the end of the year, would double the first phase with another four Patriot units, include 360 radars, and the new SkyCeptor interceptors. SkyCeptor is being introduced to fit into Patriot Launchers replacing the older generation of the Guidance Enhanced Missile TBM (GEM-T) Patriot interceptors that stopped production in the early 2000s. The SkyCeptor is a variant of Israel’s new proven and deployed interceptor, the David’s Sling, which was produced with U.S. funding in partnership with Israel.

This bold commitment of capacity and capability in IAMD shows a considerable unilateral effort by Poland to meet and surpass the NATO 2% GDP Defense budget commitment. Poland with Phase One will equal U.S. patriot deployment in Europe and in Phase two will then become the NATO country in Europe with the most IAMD capacity. Poland’s new units will be used to protect its highly defended asset list from Russian ballistic missile attack that is prominent with Iskander Short-Range Ballistic Missiles (SRBMs) in Kaliningrad on their border. Poland’s highly defended list would include the NATO and United States operated Aegis Ashore Site in Redzikowo, Poland. Poland’s partnership capacity build in IAMD Patriot batteries helps to relieve and support the strained U.S. air and missile defense of the lone and single 5-7 Battalion in Europe today, made up of just four Patriot Batteries. Poland’s new Patriot Batteries joins the commonality, with existing NATO Patriot possessing countries of the U.S., Germany, Netherlands, Spain, and Greece. With this significant announcement, Poland leads a change of direction in Europe and in NATO in the realization of the Russian threat and deploying missile defense force structure to defend against them.

“We are getting to the front row of countries which will be able not only to cooperate and jointly carry out tasks with the United States and NATO, but will be also perceived on (NATO’s) eastern flank as … stronger than others,” General Leszek Surawski, the Polish military’s chief of staff.

In addition and supplementing this significant movement by Poland is the German transfer of command of a short-range air defense unit to a Dutch command that took place at Best Barracks, Netherlands last week. Short Range air defense which is both for point air defense and for the maneuvering combat forces is in the beginning of a critical growth path of capability and capacity in NATO, filling a tremendous gap that has been exposed and neglected since the end of the Cold War. 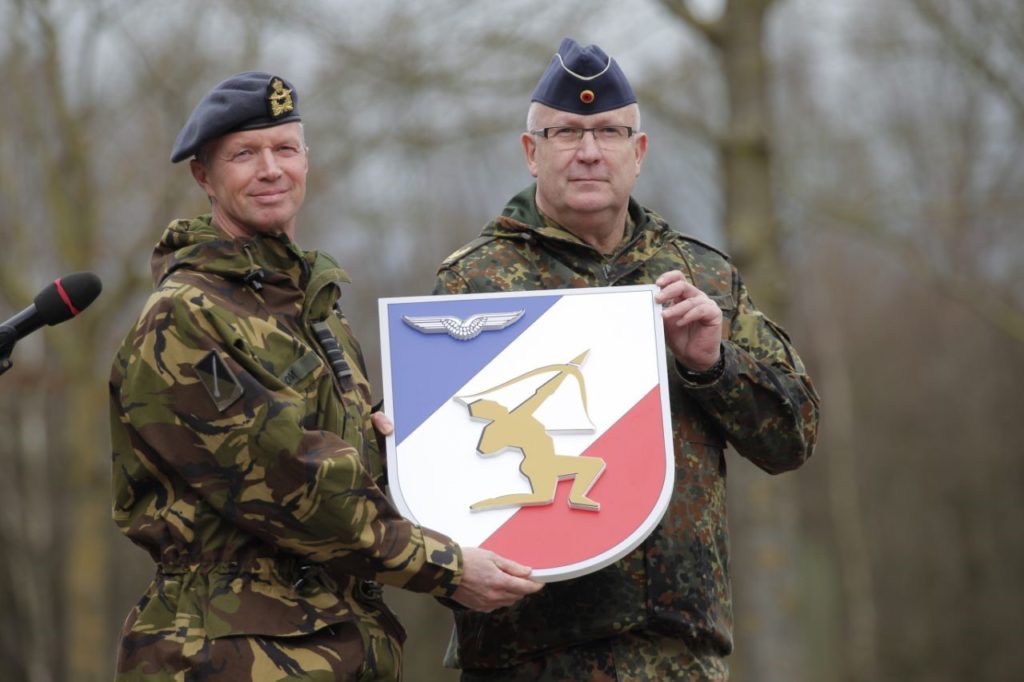 “And our strengthened cooperation could not have come at a better time. All around us, our neighbors are ramping up their rhetoric as well as their weaponry. This makes the defense cooperation between the Netherlands and Germany not only profitable and efficient, but in fact crucial. It is the only way we can protect ourselves against evolving threats. Threats like the increased availability of manned and unmanned aircraft, rockets and ballistic missiles. Threats from the sky… sometimes as tiny as an insect… that are becoming harder and harder to detect… For too long, European countries have relied on others to protect them against this. It is time we took matters into our own hands. The Apollo project allows us to do just that.” Ank Bijleveld, Dutch Minister of Defense

“Because German and Dutch ground-based air defense forces have been cooperating closely and reliably for many years now. We want to exploit synergies to improve our existing capabilities and create new ones –especially when it comes to hedging ourselves against short-range and very-short-range airborne threats. This capability is vital for our joint operations and for collective defense. We already use parts of it in Gao to protect our camp from mortar shells and rockets. And we intend to use it for the VJTF Brigade the Netherlands and Germany will provide in 2023 together with Norway. Together, we are setting another example of good cooperation within EU and NATO.” Dr. Ursula von der Leyen, German Minister of Defense

As NATO Europe begins to rebuild and regain its air and missile defense capability and capacity led by Poland, Germany, and Netherlands, establishing a school house in Europe rather than Oklahoma for the multi-domain, multi-national, and multi-service force structure is paramount in the development of this new culture. Developing a master IAMD plan for Europe and regular exercises to prove out the plan and have confidence in readiness would also be a key component of this school house.

Notably still missing in capability from NATO Europe and for large area and upper layer defense against the Russian missile threat, is the land based upper-tier missile defense system of both discrimination and interceptors – the Terminal High Altitude Area Defense (THAAD) – that are operationally deployed in three other U.S. Combatant Commands (COCOMs).

We commend the leadership of Poland and the partnership capacity building of Germany and the Netherlands in integrated air and missile defense.