In the epicenter of Europe – economically and geographically – is Germany, a member of the NATO Alliance and the European Union. Germany, as a contributing NATO force member, provides the most capability and capacity for ballistic and air defense in NATO Europe. With one Surface-to-Air Missile (SAM) Wing out of Husum, Germany that has three Patriot ballistic missile defense (BMD) squadrons and one Avenger air defense squadron dispersed across four bases around Germany. Previously, German Patriot ballistic missile defense squadrons had been deployed to Turkey – per NATO Article 4 request – between 2013 and 2016.

As pressure mounts from the president of the United States upon the most economically powerful nation in Europe – Germany – to rightfully bring its defense spending up from 1.3 to 2 percent, while its surging economy and annual surpluses continue to grow, is challenged on why, where and how to spend it. Germany’s conscious social perception from its European NATO allies to take a lead on NATO defense spending and validating the threats to NATO – to include Russia – is uniquely problematic and taboo. Furthermore, the German Bundestag and Chancellery were created for consensus-based leadership and consensus-based decision making, as each of the annual budgets for all of the fourteen executive ministries, including the Defense Ministry, must be agreed upon by all the fourteen minsters. These conditions merit Germany in a crucible of excessive resources, but not being able to spend fast enough, even if it wanted.

Even with all these attributes and conditions, Germany is the most stable and the strongest deterrent to Russia, of the European NATO nations. Germany’s economic strength in application of a two percent contribution to NATO defense is a social and moral responsibility of Germany, for the protection and defense of the European population. Germany brings forth much needed resources and reduces the burden of others, whose economies are not as productive, and the United States, who has spent more on defense than any other NATO nation. NATO defense is made up of a coalition of willing nations to provide force resources when called upon, and to maintain and exercise those forces. The threats to NATO from the East, from the Middle East, and from Africa have placed a priority for resources on increased security and safety of NATO. These multiple and significant threats have forced NATO to shift its doctrine from an assurance to a deterrence posture, to move from air policing to air defense, and to bring together ballistic missile defense with air defense. Russia’s anti-access and area denial (A2/AD) capability – the S-400, S-300, and Iskander missile – deployed and operational in Kaliningrad – covering air space beyond Kaliningrad and even includes parts of Germany, to include Berlin. Also, Russia’s use of air dominance and superiority in Ukraine demonstrated new doctrine and advanced capability unseen before that directly challenges NATO current forces. (Link to Dr. Phillip  Karber’s study on Russia’s Hybrid War Campaign).

There are four major gaps in the air and missile defense realm within NATO Europe that Germany could lead and contribute to solving:

There is no question, or doubt that Germany in leadership of the air and missile defense mission would vastly make NATO stronger and safer to protect the 750 million people in Europe. It is on NATO and Germany to have the courage to enable Germany to lead. 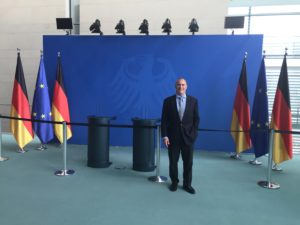 Riki Ellison at the German Chancellery on April 5, 2017.

Last week, MDAA was engaged in discussions at the German Chancellery in Berlin and with the German Luftwaffe in Cologne, Germany.