On the other side of the world, off the coast of Scotland last week, a group of eight NATO nations put forward a sea-based integrated air and missile defense (IAMD) demonstration to collectively defend a wide area at sea (i.e. an aircraft carrier battle group) from ballistic and air breathing missiles (Link). This demonstrated interoperable engagements by more than 14 ships from eight different allied nations, that have different operating systems, sensors, and interceptors creates more efficiency and brings forward the shared allied capability and capacity to relieve an overburdened and over demanded U.S. Navy.

This Formidable Shield against air and missile threats enabled the designated United States Aegis Ballistic Missile Defense (BMD) ships to intercept ballistic missile targets while being completely defended from air breathing threats. The United States ship, USS Donald Cook (DDG-75) baseline 4.0 (Link), launched a Standard Missile-3 (SM-3) Block IB Threat Upgrade (TU) – the latest upgrade and modification to the SM-3 Block 1B interceptor missile – and successfully intercepted a medium-range ballistic missile target, validating a full rate production decision that will increase capacity into the United States Fleet of 35 Aegis BMD ships today and additional BMD ships in the near future. The new SM-3 Block IBTU has increased reliability and exponentially more sensitivity on its seeker, providing more confidence against faster ballistic missiles with more range. Ships from Spain, Canada, Italy, the Netherlands, and the United States fired SM-2 interceptors and the  Evolved Sea Sparrow Missiles (ESSM) to successfully intercept air breathing targets with the Dutch intercepting a supersonic missile for a first with their SM-2 (Link). The United Kingdom, Germany and Netherlands collected and distributed data throughout the exercise. Separately, the United States ship, USS McFaul (DDG-74), an Aegis BMD Baseline 4.0 fired and conducted a SM-6 flight test, the first outside of the Pacific (Link). The SM-6 is the only interceptor in the world that can intercept ballistic missiles, intercept maneuvering air breathing missiles, and offensively strike targets on land and at sea. 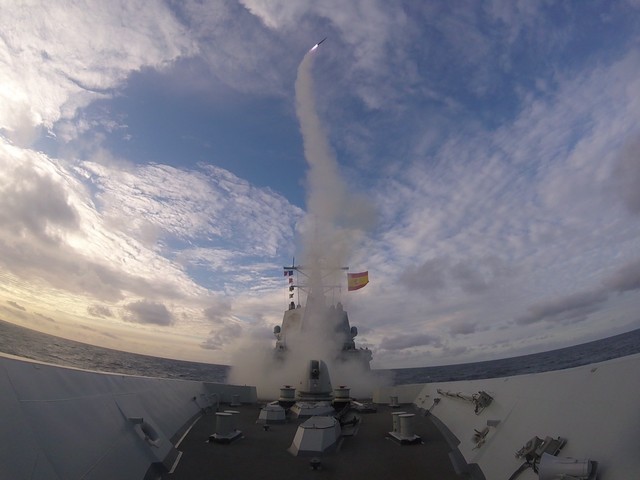 The successful interoperability of Allied ships with different operating systems to defend an aircraft carrier battle group against air breathing and ballistic missiles, demonstrated in the North Atlantic has direct ramifications to the three U.S. aircraft carrier battle groups assigned to the Pacific (Link) and the allied nations of Japan, the Republic of Korea, Canada, Australia and New Zealand. Additionally, ramifications of the Formidable Shield exercise will alleviate high demand of U.S. Aegis BMD ships based out of Rota, Spain in their deployments in the Mediterranean Sea to include the defense of Israel. Though none of the allied naval nations in the Pacific and Atlantic are equipped with ballistic missile defense interceptors, with the exception of Japan and the SM-3 IA interceptor, it would be in the best capability and capacity interest for efficiency and interoperability for all to have them deployed with the SM-3 Block IBTU.

… for the shield may be as important for victory, as the sword or spear. – Charles Darwin