Chinese Threat to Homeland Detailed in Report to Congress

Nearly all U.S. Territory and Allies in Range of Chinese Nuclear Missiles

The Department of Defense recently provided Congress with its annual report on Chinese military capabilities. The report highlights several Chinese ballistic missile developments that are solidifying China’s capability to hold the whole of Asia and nearly all U.S. territory at risk. These developments include:

1. China is modernizing its silo-based intercontinental ballistic missiles (ICBM), and increasing its number of more survivable road-mobile ICBMs. Models include the CSS-4 (13,000 km ranged) and the DF-31A (11,200 km ranged). The report estimates China possess 50-60 ICBMs capable of striking the continental United States. Some of these missiles are likely equipped with multiple warheads.

2. A new road-mobile ICBM, the CSS-X-20 is also being developed. This missile will also likely be equipped with multiple warheads.

4. China now possesses four Jin-Class nuclear missile submarines, with one additional submarine in production. These submarines are armed with nuclear tipped missiles with ranges of 7400 km. 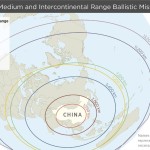