Change of Command, Not Change of Intent

“When I took this podium in 2015, I said there was no shortage of challenges that confront us: from North Korea to China to Russia to terrorism… North Korea remains our most imminent threat and a nuclear-capable North Korea with missiles that can reach the United States is unacceptable.” – Admiral Harry Harris Jr., former Commander of U.S. Indo-Pacific Command (PACOM), at the PACOM Change of Command Ceremony at Joint Base Pearl Harbor-Hickman, Hawaii on May 30, 2018.

“[Indo-Pacifc peace] was made possible by two things: the commitment of free nations to the free and open international order, and underwritten by the credibility of the combat power within U.S. Pacific Command.” – Admiral Philip Davidson, Commander of U.S. Indo-Pacific Command, at the PACOM Change of Command Ceremony at Joint Base Pearl Harbor-Hickman, Hawaii on May 30, 2018.

Twenty-six armies from the vast Pacific conferenced in Honolulu, Hawaii last week. They were all rightfully concerned and sensitive to the outcomes of the upcoming Korea Peninsula denuclearization talks between President Donald Trump and Supreme Leader Kim Jong Un. Skirting delicately around the past year’s issues in the Pacific of accelerating proliferation of North Korean and Chinese ballistic missile threats, hypersonic glide vehicles, over the horizon and complex cruise missile threats, and the Anti-Access/Area Denial (A2/AD) occupation in the South China Sea. The gap of needed ballistic and cruise missile defense discussion with our Allies on increased capability and capacity of shooters and sensors along with the command and control of multilateral allied participation in the Pacific Theater was not addressed at the conference. In order to solve these complex problems of today and follow the intent of the U.S. PACOM Commander as stated yesterday in Hawaii at the change of command ceremony, we need multi-lateral, multi-domain, and multi-generational solutions for “the commitment of free nations to the free and open international order, and underwritten by the credibility of the combat power.”

All 26 armies operating in the Pacific today are not equipped with mobile and short-range integrated air and missile defense systems that can negate or defend against the China’s demonstrated missile strike capability. This is even more amplified on both the responsibility and the assets available to defend the critical air bases throughout the Pacific that are required to provide air power projection and defend key naval ports for both air and sea supremacy in the Pacific. Over the past 100 years, land-based air defense was paramount for persistent defense and was critical to winning all the conflicts in and around the Pacific.

In today’s world and certainly the near future, persistent overhead sensors must be coupled to not just have awareness of air intrusions but provide firing control solutions to shooters that are all fused together in a mesh of sensor capability that can produce the best and most efficient interceptor solution. Those persistent overhead sensors can come from Unmanned Aerial Vehicle (UAV) platforms, satellites, manned aircraft, and aerostats. The shooters can come from tethered  Aegis Ballistic Missile Defense (BMD) ships, both manned and unmanned air platforms, and most of all, Army land-based terminal point defense systems defending key assets that would include powder and electric rail guns, along with directed energy lasers in the future. Most of these are not developed yet and face challenges by the antiquated acquisition process that takes 10 to 20 years to field a system. A lot of work and leadership must be done by the Department of Defense (DOD), Congress, and industry to have a fully integrated and deployed layered air and missile defense capabilities, let alone one that is a multi-service, multi-domain, and multi-national, that has to be in place in the Pacific.

Currently to fill this urgent gap for the United States, there is only one solution of a deployed U.S. Army land-based dedicated cruise missile defense system, the National Advanced Surface-to-Air Missile System (NASAMS) defending the National Capital Region (NCR) today. United States Patriot batteries have inherent capability to defeat cruise missiles, but are primarily designed to defeat ballistic missiles and do not have 360 degree radar coverage capability that is required to defeat current and proliferating cruise missile threats. The deployed U.S. Patriot systems in the Pacific are all in South Korea, with the exception of one battery in Okinawa, Japan. The Iron Dome system in Israel also has an inherent cruise missile defense capability, but it would take many years to test and convert that system for the United States. The U.S. Army’s future Indirect Fire Protection Capability (IFPC) with the Multi-Mission Launcher (MML) is designed for land-based point defense against Unmanned Aircraft Systems (UAS), cruise missiles, and Rockets, Artillery, and Mortars (RAM) but it is not yet ready, still having issues on development and needs more tested and proven capability and is expected in another four to six years. Additional NASAMS in the same configuration as the NASAMS currently used for the NCR and additional manpower is the only and fastest gap filler that can be put into the Pacific for land-based defense. NASAMS is also deployed by Norway, Finland, Spain, the Netherlands, and soon Oman. In complimentary action, Congress is marking up addition funding to put forward an Army cruise missile battery that would most likely have NASAMS interceptors for the Pacific and Europe on an annual basis. 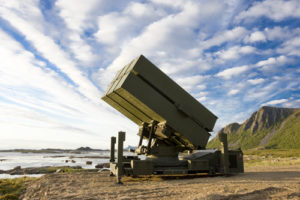 Hawaii being the critical command and force projection of cross domain U.S. capability in the Pacific, would naturally require a fully integrated air and missile defense capability of sensors, shooters, and command and control on islands. An upcoming permanent and persistent discrimination radar for ballistic missiles is being funded to be deployed in 2023 in Hawaii. This new radar will need its own interceptors on the islands or in the waters nearby and it will need cruise missile defense, which can be done today without the deployment of the new radar.