This morning, at Fort Belvoir, Virginia, the change of the command of the United States Missile Defense Agency (MDA) took place for the Director of MDA. The new Director of MDA as of today is U.S. Air Force Lt. Gen. Sam Greaves, who becomes the 10thcommander of the U.S. missile defense research, development and acquisition program since the inception of the Strategic Defense Initiative (SDI) and its first Commander, U.S. Air Force Lt. Gen. James Abrahamson, who President Ronald Reagan appointed in 1984 serving in this position through 1989. Lt. Gen. Sam Greaves is the former Commander of Space and Missile Systems for the U.S. Air Force that is a critical development and acquisition program with a $6 billion annual budget for the nation’s national security and the U.S. Air Force. The current U.S. NORTHCOM/NORAD Combatant Commander, General Lori Robinson, formally held that same command. Lt. Gen. Sam Greaves is exceptionally well qualified and experienced for the position of MDA Director as he has also served as the Deputy Director of the Missile Defense Agency and reflects a missile defense culture of outstanding system engineering, command and control, sensors, space, missiles and perspectives of a U.S. Air Force culture beginning with General James Abrahamson on missile defense. Lt. Gen. Sam Greaves becomes the fifth USAF Flag Officer to take the Missile Defense Agency’s command with the last USAF Director of the Missile Defense Agency, Lt. Gen. Trey Obering, holding that position from 2004 to 2008.

Lt. General Sam Greaves receives today in his duty of command and responsibility a world championship agency in its culture, organization, development, engineering, production, testing, deployment of capability to the war fighters and the most important asset that made all of this happen: the people employed and supported by the Missile Defense Agency. This remarkable winning culture and epic historic turnaround of the Missile Defense Agency led by Vice Admiral James Syring when he took command in November 2012 until today has been given to Lt. Gen. Sam Greaves to lead and empower. In 2012, MDA was ranked as one of the worst places to work, listed at 228 out of 240 agencies within the federal government; a problematic, delayed and failing testing record of one success out of three attempts for GMD (Ground-based Midcourse Defense) interceptors from 2008 to 2012 and a toxic leadership environment during that time (link). Very few leaders in our nation and in the world could of made this dramatic change let alone with significant reduced funding, retaining the same staffing and inheriting a extremely technical engineering problem that was considered unsolvable to solve, fix, test, demonstrate and deploy.

Not only did the now former MDA Director James Syring bring back sound pragmatic engineering discipline to the forefront of development, testing and acquisition across all of MDA’s systems, he brought vison and applied it in deploying effective reliable missile defense capability around the world defending hundreds of millions of lives. EPAA (European Phased Adaptive Approach) was deployed and became operational in Romania with Aegis Ashore and the SM-3 Block IB interceptors along with four U.S. Aegis BMD ships homeported out of Spain for the defense of Europe, THAAD deployments in Guam and Korea, 44 Ground-Based Interceptors (GBI) deployed and operational in the United States by the end of the year for the defense of the United States, Aegis BMD ships with launch-on-remote and engage on remote capability and the prolific SM-3 Block 1B interceptor as well as the THAAD interceptor in production. Vice Admiral Syring’s legacy at MDA includes emphasis on increasing sensor discrimination capability with the creation and build of the Long-Range Discrimination Radar that will be operational in 2021 in Clear Air Base, Alaska and putting in place a Medium-Range Discrimination Radar in Hawaii.  The leadership that took calculated risks on belief of his people at MDA and turned it into validation of his two major development interceptor systems of the GBI CE-II Block 1 that was proven in the first ICBM (intercontinental ballistic missile) intercept on May 30, 2017 (link) with operational capability and the SM-3 Block IIA (link) with the Japanese and its final test before IOC upcoming. He further laid the foundation and engineering for the next generation GBI the Redesigned Kill Vehicle (RKV) that is planned to be deployed in 2021. Vice Admiral James Syring, by his sheer results from the Missile Defense Agency during his time there, was one, if not the greatest MDA director for the United States of America in the development, testing and deployment of missile defense capability and capacity. As a nation, we would hope and expect that Vice Admiral Syring, his contributions, leadership and expertise continues to be of service to help make our nation and world a safer place. 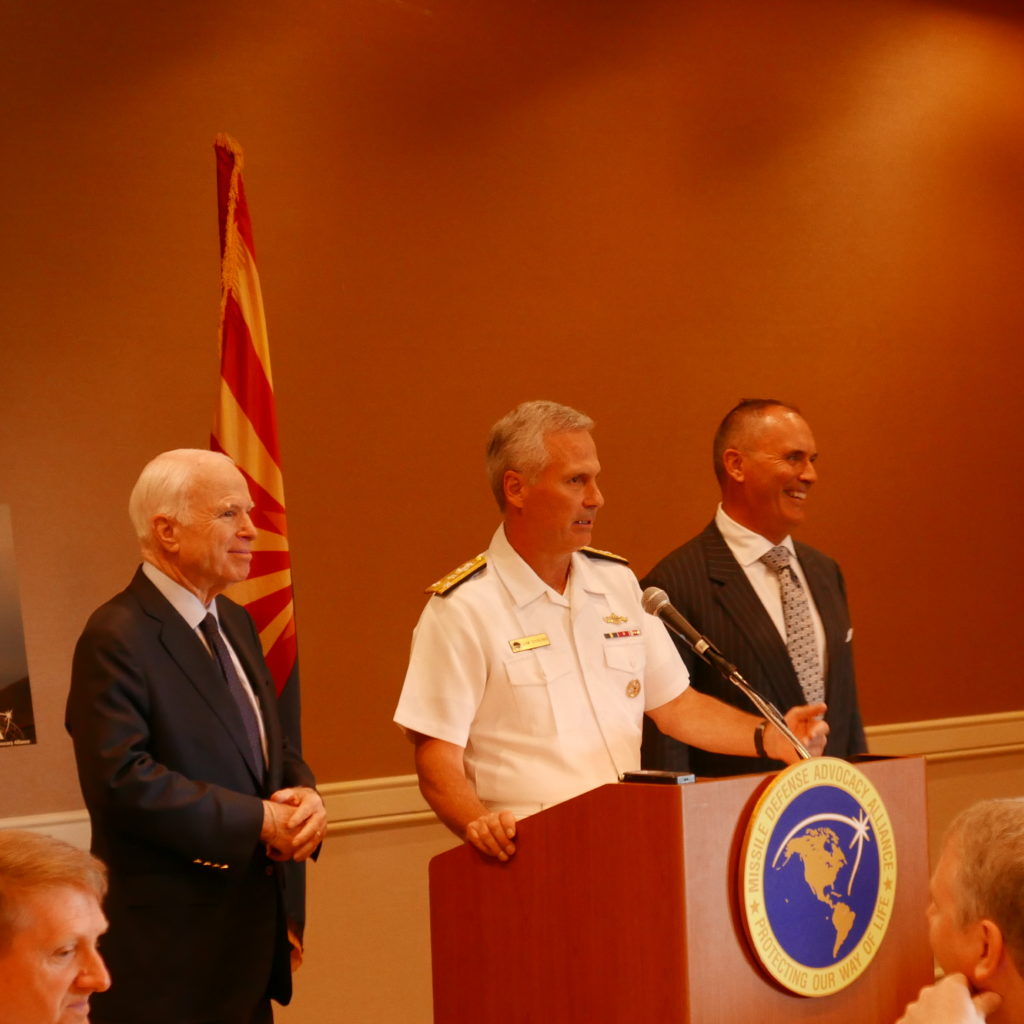 Lt. Gen. Sam Greaves has a great organization to inherit, a greater leader to follow and expectations of him will be much greater to increase capacity and capability of missile defense systems than any other previous MDA Director to stay ahead of the accelerated advanced proliferation of the ballistic missile threat the world is witnessing today and over the next four years.

It is a new era of missile defense unlike any we have ever seen before and we need the best and the brightest to lead and win! The American people expect and deserve a championship dynasty in missile defense and Lt. Gen. Sam Greaves has that responsibility today and throughout his command at the Missile Defense Agency.