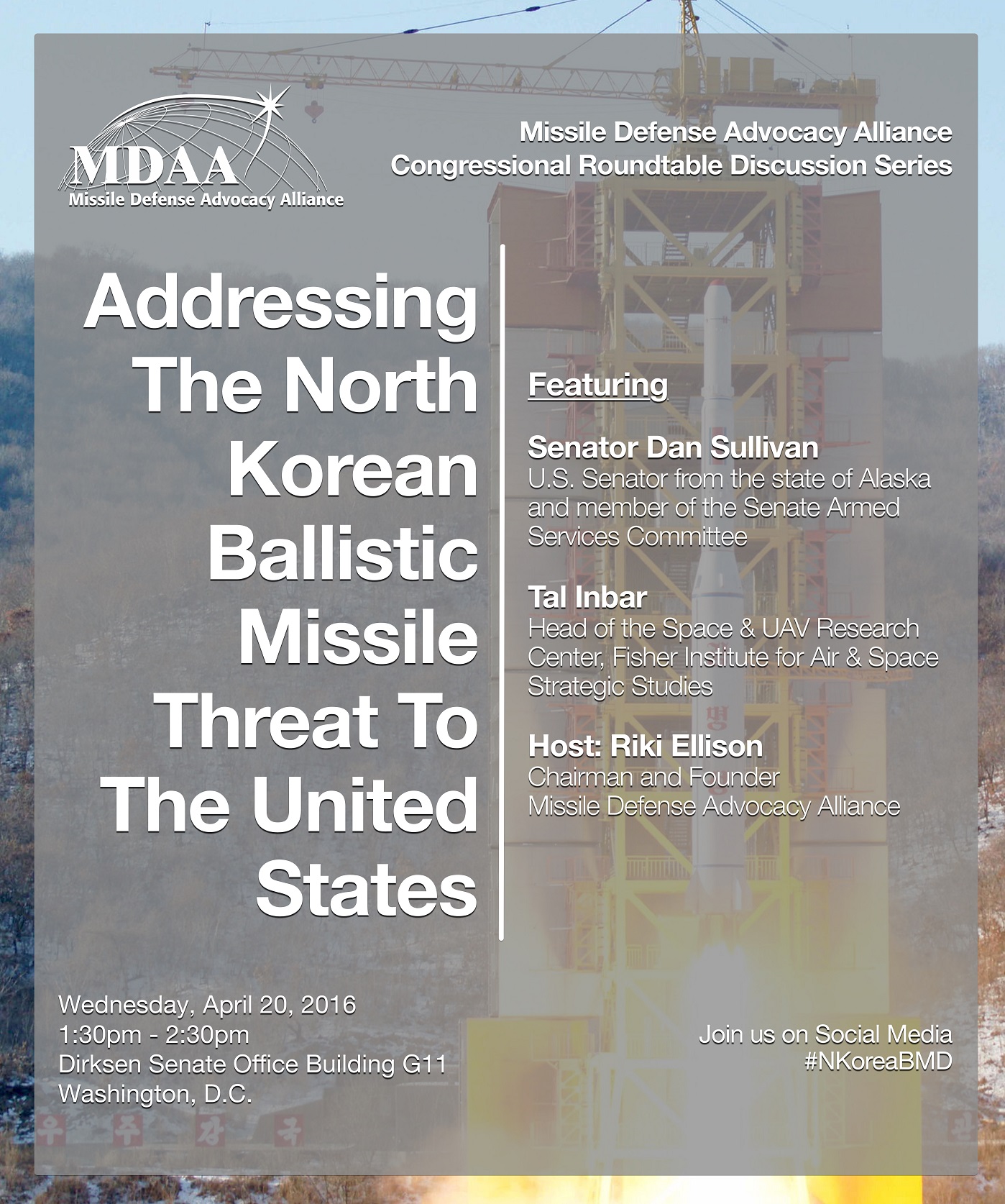 At the Dirksen Senate Office Building, MDAA hosted an educational round table discussion on “Addressing the North Korean Ballistic Missile Threat to the United States.” Speaking at the event were two dynamic and emerging leaders on missile defense, the Honorable Democratic Congresswoman Tulsi Gabbard who represents Hawaii’s 2nd District and the Honorable Republican Senator Dan Sullivan who represents the State of Alaska. Both speakers offered their perspectives as elected leaders that serve on the House and Senate Armed Services Committees and play an active role in authorizing missile defense resources.

“This [North Korea] is clearly one of these threats, from the U.S. perspective, that’s not going to go away, that’s not going to decrease, it is only going to increase, and we need to be ready for it. So I think we have a decent start, but there is a lot, lot more to do.”  –Senator Dan Sullivan

In addition, Mr. Tal Inbar, one of the world’s leading specialists from the Fisher Institute in Israel, whose country’s survival depends on the correct intelligence and analysis of Iranian and North Korean ballistic missiles and nuclear development, spoke on the development of and threat posed by North Korea’s KN-08 ballistic missile. 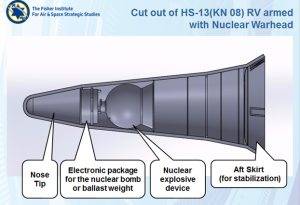 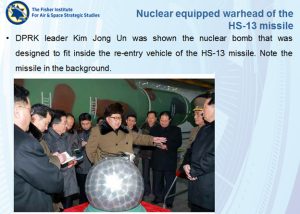 “In the eyes of North Korea, you could mass produce missiles and introduce them to operational service without testing them completely in flight, but, keep in mind, that if Iran is conducting flight tests of Shihab-3 it’s validation of the design for the Nodong…and the same applies to Pakistan, where [the Nodong] is known as the Ghauri.”

“On March 15 of this year, [North Korea] also showed us the next generation of warhead design, this [points to presentation] is only the nosecone section of the second version of the HS-13 or KN-08 missile, and you can see this was an erosion and ablation test of the nosetip, meaning that they wanted to test and simulate the extreme heat of the reentry phase of this missile…this test was conducted with very good results for the North Koreans, meaning that the shape [of the nosetip] was the same as at the beginning, meaning it won’t affect the accuracy of the missile once [it is] fired.”

“All the elements of the program are there; the missiles, the engines, the nosecone, the nuclear device inside, and they all fit into one unified weapon system, which is a real and credible threat.”

It is with complete resolve from this presentation (Link to slides) that the U.S. needs to account for North Korea’s nuclear ballistic missiles that are in existence and are much more advanced than previously speculated. Rightfully so, this assessment stands by Admiral Gortney, Commander of the the United States Northern Command, who stated in Congressional testimony in March 2016 that “It’s the prudent decision on my part to assume that he [Kim Jong Un] has the capability to miniaturize a nuclear weapon and put it on an ICBM.”

There is a real possibility and prudent assumption that North Korea has at least 6 to 12 nuclear tipped, long-range, mobile KN-08 missiles, a number that will certainly increase over the next 4 years, and have the range to strike Guam, Hawaii and the continental United States. With only 30 Ground Based Interceptors in place today and plans to add only 14 more interceptors by the end of 2017 to defend all of the United States from both North Korea and Iran, there is simply not enough reliable inventory to sustain the U.S. until 2020 from the growing number of North Korea’s already 6-12 KN-08s. This is especially worrisome given most of the GBIs are older, first generation interceptors and the rest are second generation interceptors that are still being tested for increased reliability and both generations of interceptors deployed today because of those reliability issues will be replaced or enhanced by 2020. With an operational long range discriminating radar in Alaska by 2020, the Ground-based Midcourse Defense system will have much greater reliability and confidence in 2020, than it does between now and 2020. Given the current missile defense capabilities, there is reason to have concerns about the ability to defend the entire United States from 6 to 12 increasing North Korean KN-08 nuclear ballistic missiles between now and 2020, due to the use of a very conservative low risk shot doctrine of 4 or more interceptors per warhead to get as close to 100% confidence as possible against a nuclear weapon.

This is an extremely serious national security problem and one that requires an urgent enhancement of our missile defense capabilities today in the Pacific, and increasing all of our missile defenses to protect our entire population whether they are in Hawaii, California, Washington D.C. or Alaska. We cannot tolerate unnecessary risk to our population from a nuclear attack when there are current, unused missile defense assets that can be turned on and put in place to help resolve the problem and reduce the risk until 2020. Here are some of the options of current U.S. missile defense capabilities in existence today that the United Stares can put in place to better protect its citizens against the clear and present danger of North Korea . (Link to white paper on Missile Defense Capabilities in the Pacific)

Hawaii remains more vulnerable and less protected than the continental United States from North Korea’s nuclear ballistic missiles because of a shorter battle space that gives only a one shot opportunity, and a lack of persistent sensor discrimination radars between Hawaii and North Korea. There is no second or third shot intercept opportunity for Hawaii like there is for the rest of the continental United States. Yet the United States has additional missile defense capabilities in an Aegis Ashore Site and a forward X band radar on Hawaii that duplicates what Europe has today to defend against Iran’s ballistic missiles. This system is specifically designed and proven to launch its interceptors through engagement from remote sensors. More importantly, it has a small footprint to defend and a simpler firing solution with a head on shot terminal shot and provides a cost-effective second and possible third layer of additional missile defense in case anything goes amiss on the long distance ground based interceptors.

“Another area, another issue that I brought up with Secretary of Defense and General Dunford and something that I am continuing to work on is both making sure that the Aegis Ashore facility on Kauai in the Pacific Missile Range Facility remains open, but also operationalizing it so that we have and additional tool in our tool kit to strengthen our defense in Hawaii, as well as in the region. This is a facility on the island of Kauai in my district that is truly one of kind in the country. There is not another testing facility like it and it really truly serves as an asset, not only to our Navy and to our Armed Forces, but is something that has proven to be a great asset to our allies who come and utilize the facility as well. There are a lot of different challenges that we face when we are talking about this issue of missile defense and balancing that we the overall need and drawing resources within the DOD, but this is something that I and many other agree requires more focus, heightened awareness, and really information being provided to members of Congress and our staff and our teams for those who aren’t directly involved or implicated in these direct threats, such as those that we face out in Hawaii.”

We leave you with Senator Dan Sullivan’s position.

“What I was concerned about and I mentioned in the hearing is you see the threat going like this [hand sloped upward] to our country, and by the way not just Alaska and Hawaii. I know Tulsi Gabbard was here before I was, she’s a strong advocate. The threat going this, but the spending and capability, initially under President Obama was going like that [hand sloped down], came back, but what I worry about is that you have either flat or slightly declining when the threat is going up. So that’s not good, and it’s an issue that I have been focused on in the committee. Alaska is the cornerstone of our missile defense in so many different ways. One thing that is positive from our perspective is that we are going to start to see a significant increase in spending in and investment at Fort Greeley in terms of having 40 Ground-based Interceptors there by 2017. Interestingly, as I mentioned, President Obama’s initially was not supportive of that but I think once he came into office, started getting his daily intelligence briefings, nothing like having the responsibility of the nation to change the trajectory of your policy.”